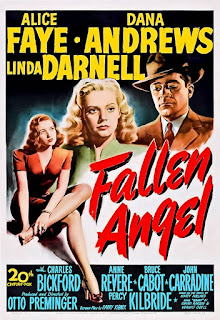 “We were born to tread the earth as angels, to seek out heaven this side of the sky. But they who race above shall stumble in the dark, and fall from grace. Then love alone can make the fallen angel rise. For only two together can enter Paradise.”

Fallen Angel is a very good though not brilliant entry into the genre, it doesn’t have Laura’s gloss and dazzle, focusing instead on grit and desperation.

The cinematography throughout is impressive, thanks to Joseph LaShelle, with wonderful shadows, clandestine meetings in dark alleys and a great opening sequence, a bus speeding through the dark night with credits zipping by as super-imposed street signs. 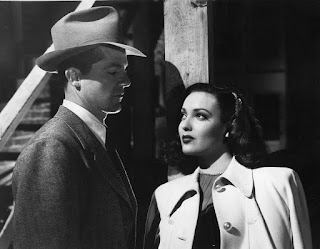 The movie sees Dana Andrews as aimless drifter Eric Stanton. After he can’t pay his fare all the way to San Francisco, he’s unceremoniously tossed off a Greyhound literally in the middle of nowhere, halfway between LA and SF. No man’s land, the nothing town of Walton. He’s down to his last buck and needs money fast. In Pop’s diner he meets Stella (Linda Darnell). All it takes is just one look and he’s hooked. He wants her, she wants money.
Trading on his charm, he devises several schemes to strike it rich. He’s not only a drifter, but soon-to-be con artist. After meeting smarmy spiritualist Madley (John Carradine in a great little supporting role), he sees his chance to sucker gullible local yokels out of their money by raising phony ghosts from the dead. Stanton seems to be a natural at these scams, he isn’t hampered by an abundance of conscience. He’s so good in fact that Madley offers him a steady job. But he’s stuck on Stella.

To win his lady love, Stanton concocts quite a cruel plan. Marry one girl, local heiress June (Alice Faye) for her money, then ditch her, run and marry the other. His plan works out, but to great his surprise he finds himself falling for his bride. When Stella gets herself murdered because she’s been pushing somebody too far, the heat is on him, as he was seen arguing with her. He goes on the run with June, because he doesn’t want the murder pinned on him…

Noir is predominantly an urban based style of filmmaking. Crowds of people can barely hide the isolation and loneliness of the protagonists. From the faceless anonymity of the bleak concrete jungle Noir derives many of its themes. However, Noir can survive perfectly fine outside this particular environment. The very often confined and narrow-minded atmosphere of small towns too can be a fertile ground for alienation. Walton seems to be more or less a one-horse town with what looks like just one place for entertainment. Nothing ever happens there and nothing is ever crowded which gives the movie a very intimate feel. The town seems to exist mainly in shadows, hinting at dark secrets and thwarted passions that lurk underneath.

Andrews is very convincing as the down-on-his-luck huckster who’s always looking for a quick buck. He’s been running to and from something his whole life. Fights, honest work, responsibility. He’s tormented about his past. He’s a failure, nothing he touched ever turned to gold, one financial endeavor after another tanked, he has a million jobs behind him. He confesses to June: “It all adds up to only one thing, a complete wash-out…at 30”.
He’s not really a bad guy, but he isn’t good either, and as such he’s the perfect ambiguous Noir protagonist. He’s quite complex, he doesn’t give you answers easily because he probably doesn’t know them himself.

It’s the counter at Pop’s Diner that serves as the altar the men of Walton come to worship at daily, drinking bad coffee just to get a glimpse of its resident voluptuous and provocative hash slinger slash goddess with her come-hither but don’t touch me looks.

Her entrance is pure Noir and grabs the audience’s attention right away. Stella comes back after a three-day absence from just one more lousy fling that went nowhere, world-weary and tired. The camera lovingly caresses her legs, and so do the men - with their eyes. We know right away the dame’s no good. Stella’s been around the block a few too many times. 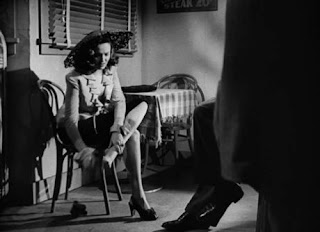 She has a steady supply of gullible suckers and milks them for all they're worth. The girl wants to live easy. Diner owner Pop is acting like a love-sick puppy, retired cop Judd and salesman Atkins hungrily watch her all the time, so Stanton has to get in line.
But what Stella wants is a ring on her finger. The guy who gets her must have money to pay her way out of this backwater, that’s the way to her mercenary little heart. She wants a mealticket to respectability, then maybe she’ll consent to a little canoodling.
It’s not marriage per se she wants, it’s marriage WITH money, emphasis on money. Then she can prove to the world that she’s not just a cheap hash slinger. In an odd way, Stella wants to be June.

We can understand her desperation, but the problem is Stella isn’t just greedy, she’s bone idle and downright lazy. She’s belligerent, selfish, coarse and goes out of her way to insult customers and the men who desire her. Her demeanor is a stark contrast to her looks. Sure, she’s honest about what she wants - she makes it quite clear it isn’t love she’s after, it’s money - but only because she’s so self-centered, the feelings of others mean nothing to her. Frankly, she’s simply not the sharpest knife in the drawer. She doesn’t have the brains to make it work, otherwise with her looks she should have been on Easy Street a long time ago.

It’s interesting to note that it isn’t Stella who brings Andrews down, his doom is entirely of his own making. He has the chance to leave town numerous times, Stella certainly doesn’t try to hold him back, but he doesn’t. She isn’t really a femme fatale. Sure, she's duplicitous and calculating but she's lacking that all-important killer instinct. She neither has the cunning nor the ambition to be fatal.
In contrast to other deadly dames, she isn’t a murderous sociopath who sets some poor sap up to take the fall for her crimes, she’s just a floozy who wants money and gets herself killed in the bargain. 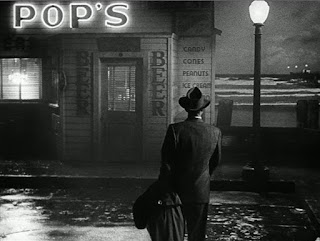 Pop’s Diner is the spiritual center of the town. It’s a crummy little joint out in the boonies, it’s nothing but a shoddy clapboard structure with the word BEER written in huge letters on it. But the joint is just as crummy as the people who frequent it. Losers, drifters, down-and-outers…Stanton fits right in.

Alice Faye got top billing, but has the most thankless role in the movie, the good girl, the local spinster. Guileless, bookish, virginal and repressed, she falls for Andrews in no time.

Originally, Faye’s role was supposed to be much bigger. She had been a very successful musical actress, Fox’s No. 1 star for a while, who now wanted to make the transition to dramatic roles. Fallen Angel was supposed to launch her career on a new path. In something of a cruel twist this didn’t happen as she was up against Darnell whose smoldering sultriness was hard to beat and who became a huge star after the film. A lot of Faye’s scenes were left on the cutting room floor. This decision upset Faye, and is partly given as a reason she retired from film after Fallen Angel. In Faye’s view Preminger decidedly favored Darnell and made her role too prominent.
This should act as a warning to all actresses. If anyone ever offers you the role of good girl in a Noir, just say no. Noir belongs to the bad girl and the good girl is simply the other woman. 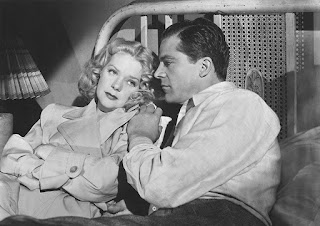 Nevertheless, Faye is good as June, the redemptive woman though she is without a doubt too much on the saintly side. Stella and June are contrasted dramatically throughout the picture, night-time Stella and sunny-day June, sincerity vs. the gold-digger. June wants companionship, her love for Stanton is unconditional which in the end turns out to be a strength rather than a weakness. When things go bad she rises to the challenge. She’s the one who convinces her man that he’s not as bad as he thinks himself to be. All he needs is the love of a good woman. We’ve all heard that hoary chestnut before, but as it’s Dana Andrews we’re talking about it’s a safe bet to take a chance on him. We believe it because June believes it. There is always the possibility of redemption, the quote about the fallen angel who can rise again makes that clear.
As it turns out, the fallen angel is Stanton, not Stella as we were made to believe in the beginning. Stella likely descended to a completely different place.

We've been heavily influenced by film critics to see happy endings in Noir as a fault and the redemptive aspects of the genre are often overlooked. Many Noir protagonists do find salvation, though oftentimes only in death. But Noir doesn’t have to fit a particular template.

Despite the happy ending, Fallen Angel has its Noir credentials straight. Lust, unfulfilled longing, sexual obsession, broken promises, dashed dreams, greed, desperation and the overwhelming desire to break free from stifling unhappy lives are the main themes. Everybody here wants something they can’t have. For most of the characters their aspirations end in a nightmare.

Fallen Angel certainly doesn’t overshadow Laura, but it’s good in its own right.