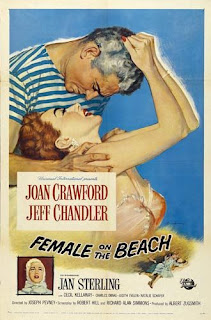 I love this movie. It’s pure unadulterated campy fun and I mean that as a compliment. Glossy, naughty and tawdry. A heavy-breather for the discerning connoisseur of camp.

Female on the Beach should be retitled Hot' n' Bothered in the Sand. The screenplay teems with outrageous dialogue that’s dripping with innuendo, and we get steamy clinches galore. So much lovely velveeta.
This is not hard-boiled crime drama, more noirish melodrama. The film is beautifully photographed, fully lit, with a gorgeous set design that would have looked great in color.

Joan Crawford plays Lynn Markham who moves into her late husband’s beach house right after the previous tenant Eloise Crandall has fallen, or been pushed, to her death.
Muscle-bound beach boy gigolo Drummond “Drummy” Hall (Jeff Chandler), who is “kept” by Joan’s neighbors, Queenie and Osbert Sorenson, had an affair with Crandall. He puts the moves on Joan right away, after all he’s been the boy toy of many middle-aged lonely women, and Joan is loaded. But Drummy may have a darker secret. 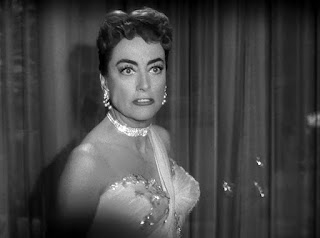 Slightly over-the-hill but still attractive Joan Crawford vamps it up for all it's worth. At this stage in her career Crawford was just about done with leading lady parts. With her star status fading, she became the woman so many unfortunately remember her as: her severe hairstyles accentuate her hard features and mask-like make-up and she wears a wardrobe befitting a woman half her age… But being past her expiry date never stopped Joan from putting up a good fight.
Somehow, by sheer force of personality, Crawford pulls it off, and is able to deliver campy dialogue with a straight face. Her acting abilities are good enough to make her character believable and rise above absurdities.

Hunky beefcake Chandler, who has “the instincts of a stallion and the pride of an alley cat”, is at the same time perfect and over-the-top as the homme fatale women swoon over. He oozes so much sex it’s positively indecent. Somehow under all those muscles we are made to believe beats a heart of gold. 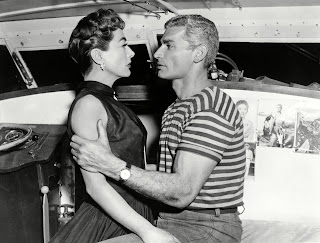 He’s a gigolo with a well-rehearsed line of seduction talk. Joan pretends not to like him and plays hard to get, slinging her trademark bitchy one-liners at him, but it’s all just a front. He rips her clothes off, they have sex, next few days he doesn’t call, Joan gets lovesick and hits the bottle - it must have been good. Yes, it’s that kind of movie. It’s all as subtle as a sledgehammer.

Joan’s neighbors, perpetually broke card sharks Queenie and Osbert Sorenson, are priceless. As working is not really their line, they’ve come up with a better racket: grooming and pimping young beach studs who then fleece elderly broads out of their money.
An imdb reviewer called them “piss-elegant pimps” and I have yet to read a better description of them.

If this all sounds very sordid and sleazy, that’s because it is, but it’s great fun to watch. The dialogue is more than entertaining and seeing Joan and Chandler sling snark at each other is worth the money for the DVD alone. 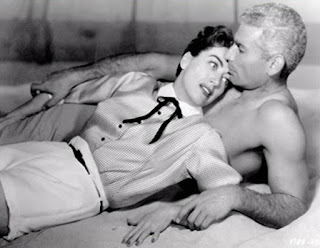 Both actors manage in the end to transcend the pitfalls of camp and make you care for their characters because of the human drama that underlies all this outrageousness. Here we have two less than perfect people trying to find happiness.

The set-up of Crawford’s and Chandler’s romance is all grown-up too. Lynn understands and accepts that Chandler is a gigolo, she doesn’t have any illusions about him, and she also knows that without her money he wouldn’t be after her. She can accept that fact because she herself knows a thing or two about roping in aging sugar daddies. That’s how she got her husband and her fortune. Lynn also knows that at her age the gigolo is her last chance.

Jan Sterling has a pretty thankless role as one of Drummy’s cast-off girlfriends. Her hairstyle and clothes are very unflattering and severe. Crawford didn’t like female competition on the set so I assume that’s the reason.

The movie is an unrelenting cheese fest and a soap opera, but with dialogue like "I wouldn't have you if you were hung with diamonds upside down!” it is simply a must-watch.
at January 21, 2018