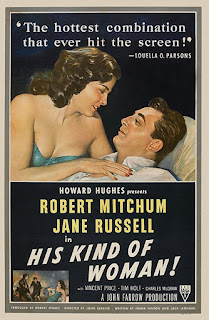 As already stated in my Narrow Margin review, in 1948 independent producer Howard Hughes purchased RKO and established himself as head of production. As studio boss his overpowering ego could never resist meddling in production matters and often demanding extensive changes to scripts. He routinely held up promising films for months and even years with re-writes and re-shoots, especially where one of his obsessions/mistresses was concerned. His egomaniacal nature didn’t allow him to let anybody else take the reins. During his 7-year tenure, the studio suffered massive financial losses due to his controlling and volatile management style. His irrational behavior took a heavy toll, many of his employees looked for work elsewhere.

But despite this predilection for tampering RKO was able to churn out one good Noir after another, at least for a while. In the long run nothing though could stop the studio’s steady decline. Hughes was responsible for several expensive flops and as a consequence by the mid-50s RKO was in dire financial strains ceasing production in 1957.

His Kind of Woman was one of Hughes’ vanity projects. It had two of RKO’s biggest stars, Robert Mitchum and Jane Russel, plus the impressive supporting cast of Charles McGraw, Raymond Burr, Vincent Price.
The movie was directed by John Farrow and an uncredited Richard Fleischer. The shoot suffered numerous production problems. Farrow had almost finished the film when he was fired and replaced by Fleischer. New screen writers were brought in and the film was re-shot and re-edited considerably. On Hughes’ orders, Fleischer had to redo a lot of the scenes, inflating the cost of the picture greatly. But backed by the large bankroll of a millionaire playboy it didn’t seem to matter. 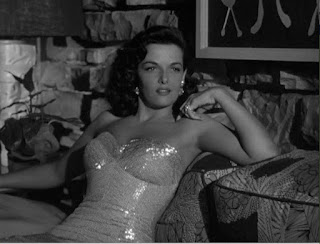 With Hughes as producer and Jane Russel as star the movie was guaranteed to have Hughes’ paw prints all over it. He was chiefly concerned with showcasing Miss Russell’s considerable bosomy charms which are displayed to great advantage in an ever-changing fabulous wardrobe. He succeeded. Russell looks fantastic, wearing one sexy number after another.
As brassy, sassy and street-wise dame she’s hard to beat and one of the few women who could stand up to Mitchum. Their repartee is gold.

Mitchum plays Dan Milner, a down-on-his-luck, professional gambler who accepts a mysterious job by some shady types that will take him out of the country for a year but pays $50,000, tax-free. He’s supposed to go to the Mexican resort Morro's Lodge where he will receive further instructions. He does and on the way meets “millionaire” gold-digger and shantoozy Lenore Brent (Jane Russel) who’s looking for a rich husband, preferably in the shape of Mark Cardigan (Vincent Price), ham actor extraordinaire with just one little flaw: a wife.
Turns out gangster Nick Ferraro (Raymond Burr), who’s been deported from the States, needs a sucker and the sucker in question is Mitchum. Ferraro wants to sneak back into the country and for that he needs Mitchum’s face (!) and identity… 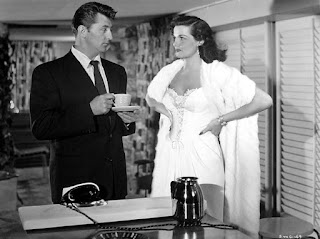 The picture was certainly an overly ambitious endeavor. You either love it or hate it. To me it’s charming, it’s the perfect antidote to all those depressing Noirs, but then who says Noir has to be doom and gloom all the time? It’s probably best to see it as tongue-in-cheek crime thriller. In the parameters of Noir the picture is a failure. It’s hokum plain and simple, but the best kind of hokum. An utterly original one-off.

Nevertheless the movie suffers numerous problems. To begin with, there’s too much going on here. At 2 hours the picture is over-long, the action is mired in too many unnecessary subplots.
The story meanders. Along with Milner we try to unravel the reason he’s been invited to the resort, and it takes about an hour until we get an inkling of what’s going on. The plot starts down one road, then suddenly and sharply sidetracks into another, no matter if the viewer is ready for it or not. The pieces for a good film are all there. They just belong to about a half-dozen different movies, not one.

His Kind of Woman doesn’t know what it wants to be. Genre-wise, it’s all over the place. It’s positively schizophrenic. First act: Noir, second act: romance/battle of the sexes sparring/drawing room comedy, third act: slapstick mixed with action. Until we get to the Mexican resort, Woman is Noir all the way through. The audience has come to expect seediness from little Mexican border towns, but here we get a Frank Lloyd Wright-ish expensive retreat, a gorgeous Mid Century Modern dream, very sophisticated and fully-lit.
And then out of left field Vincent Price shows up. Now we’re in comedy territory. 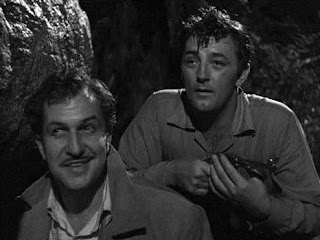 Mitchum is his typical sleepy-eyed, sexy, laid back self. He barely bats an eyelid after several hoods beat him up. Oddly enough he only drinks milk.
The chemistry between him and Russell is electric. The sparks fly, their conversations are full of witty innuendo. They’re the glue that hold the movie together. Both stars are immensely likable, because neither of them seemed to take themselves seriously.

It is Price though who walks away with the movie. He could never quite escape the scenery-chewing and camp, but that to me is what made him so endearing. In Woman he’s a ham playing a ham. You’ve got to love an actor who can mercilessly lampoon himself. He’s even told by one character: “You are not a pig. You are what a pig becomes. It is sometimes eaten between two pieces of bread.”
As Mark Cardigan, he’s a ham with the penchant for quoting Shakespeare. The Bard may have made one or two rotations in his grave. Hughes didn’t want Price to keep his antics under wraps. Cardigan was Hughes’ favorite character and he beefed up the role considerably after Fleischer came on. The entire third part of the movie belongs to Price. There’s a wonderful scene where Cardigan - clearly enamored of himself - screens one of his own swashbuckling movies to a selected audience. It’s a film in a film, the producers are winking at us. Hollywood always liked to poke fun at itself, but only in a self-reverential way.
In the end the ham actor - buckling swashes left and right - becomes a real hero and saves the day. He vacillates between farce and real heroics. 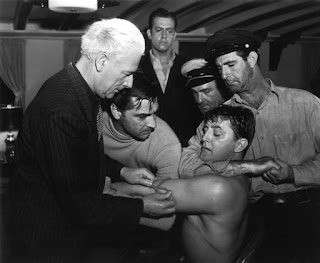 Raymond Burr, as a Lucky Luciano type of gangster, is at his evil and sadistic best. I always considered it a shame that he changed sides and became one of the good guys later. Hollywood lost one of its most memorable baddies.

Surprisingly the plot gets increasingly brutal as story unfolds, especially during the comic part. Price’s hijinks are intercut with sadistic torture scenes of Mitchum by Burr and his stooges. It’s a strange amalgam of comedy and brutality. Burr’s and Mitchum’s scenes together are disturbing and provocative and one wonders how they escaped the censors.


In the end the movie is not entirely successful, it’s maybe less than the sum of its parts. One of the greatest Noirs that never was.
at February 27, 2018