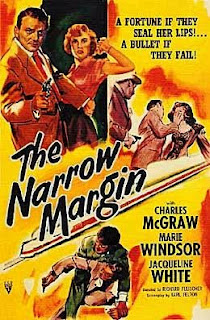 "She's a dish… a 60 cent special. Cheap, flashy and strictly poison under the gravy.”

The Narrow Margin is a film I can watch till the cows come home, go out and come home again. It was directed by the underrated Richard Fleischer who made some fabulous B movies before moving up to As. Some movies may not be born with high expectations, but manage to rise above their humble origins by some kind of magic.

Two detectives, Walter Brown (Charles McGraw) and Gus Forbes (Don Beddoe), are sent to Chicago with orders to transport a mobster’s widow, Mrs. Frankie Neall (Marie Windsor), to LA where she is supposed to testify before a grand jury against her husband’s mob connections. The mob wants to shut up her up permanently. The safe house where she’s kept is compromised and Forbes gets killed. With a couple of hitmen hot on their trail, Brown must escort Mrs. Neall across country by train himself. She turns out to be a real piece of goods, with a few secrets of her own.
On the train Brown keeps bumping into the wholesome Mrs. Sinclair (Jacqueline White) who's revealed to be the real Mrs. Neall, traveling incognito so as not to attract any attention. Windsor was just a decoy.

In 1948 independent producer Howard Hughes purchased RKO and established himself as head of production. As studio boss his overpowering ego could never resist meddling in production matters and often demanding extensive changes to scripts. He routinely held up promising films for months and even years with re-writes, re-takes and re-shoots spending thousands of dollars in the process.
Made by RKO in 1950, The Narrow Margin sat on the shelf for 18 months. Hughes loved the movie so much he wanted it redone as an A picture with his stars Robert Mitchum and Jane Russell, eliminating all scenes with McGraw and Windsor. Erratic as Hughes was, thankfully he later forgot about his intentions and released the picture, but not before butchering it. Some crucial scenes ended up on the cutting room floor.

The Narrow Margin is a well-executed clever little thriller with many red herrings though there are a few plot holes you could drive the proverbial truck through, plus implausible plot elements that don’t hold up under logical scrutiny. How come nobody knows what Mrs. Neall  looks like? Why would the DA let a material witness travel cross-country without police protection on the same train as the decoy? Who betrayed the detectives at the safe house?
Never mind. At 70 minutes there is no time to dwell on such trivialities. Fleischer’s direction is assured and economical. The film was brought in on a 15-day schedule for a paltry budget and turned in a huge profit for the studio. It’s a lesson in barebones filmmaking that exploits its one location. Not a frame is wasted and the camera work by George Diskant is near perfect. The dialogue is snappy and pulpy, and there’s a great fist fight between Brown and one of the goons which was ripped off by Sean Connery and Robert Shaw in From Russia, With Love. 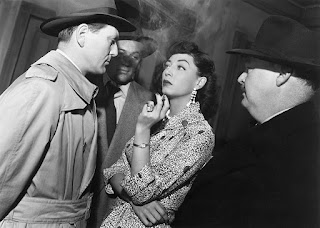 Trains have always served filmmakers as background for suspense thrillers. In The Narrow Margin, the train is not just background, it is a character in itself, a microcosmos that condenses action and emotions. The narrow corridors are a labyrinth that offers no escape from danger. Fleischer exploits the train’s passageways and cramped compartments to maximum effect, heightening the sense of claustrophobia and the paranoia of being trapped. There’s no soundtrack, the only sounds we hear continuously in the background are the sounds of the moving train. The churning wheels generate tension and urgency. Well-done rear projection was used to sustain the illusion of motion when looking out of the window. Fleischer was also one of the first directors to make use of a hand-held camera to simulate the moving of the train. Little details like the transition between Windsor nervously filing her nails and the wheels of the train rhythmically turning add a nice touch.


But the best thing about the movie are the main players. Marie Windsor, with a killer bod, eyes of the bedroom variety and a tongue as sharp as a razor, delivers her dialogue flawlessly. She’s a hard-nosed dame, brassy, cheerily amoral and cynical. She’s the gold standard that all other tough dames have to be measured against. She gets the best lines and all the fun while blowing cigarette smoke into Brown’s face. Windsor expresses zero sympathy for Forbes, the bullet he took for her and Brown’s seething anger about it. “Some protection they send me: an old man who walks right into it, and a weeper” is her contemptuous assessment of the situation. She even begins to flirt with Brown mere minutes after his partner gets killed. She isn't just hard-boiled, she's a ten minute egg.

Walter Brown is the essence of all Charles McGraw roles. With a voice like gravel and a face like granite, he’s a cop so tough he could have us believe he’s capable of chewing and swallowing a bucketful of nails without batting an eyelid and spitting them out again one by one. He doesn't so much speak his lines as bark them. If Windsor is a ten-minute egg, he's at least a fifteen-minute one. 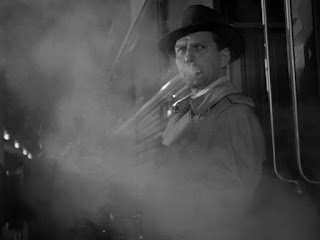 Brown has a very clear picture in his mind of the unseen moll he’s supposed to protect. She can only be a cheap dame, no decent woman would marry a gangster. His partner counters with the slightly banal insight that “all kinds of women” could potentially marry a gangster, not just the vision Brown has conjured up. But Brown’s musings about the character of gangster molls seem to be confirmed once they clap eyes on Mrs. Neall.

Watching McGraw and Windsor duke it out with the gloves off and slinging snark at each other is worth the price of admission alone. Heartwarming goodwill and kindness just drip off the screen - in acid form. This is a brass-knuckle fight. Brown’s every word to Neall just oozes venom and contempt, nobody tells a dame to shut up just like McGraw. He holds her at least partially responsible for the death of his partner.

They may despise each other, but nevertheless generate a lot of heat. Their relationship has all the dangers of high explosives. For no discernible reason at all Windsor wears a sexy black lace negligee on the train. She doesn’t seem to be averse to some canoodling with Brown. Or maybe that’s just wishful thinking on my part. To my eternal disappointment, and I'm sure I'm not the only one, they didn’t get it on.
Unfortunately the idea of the “right” woman for Brown - wholesome good girl Mrs. Sinclair - is pushed too much. Jacquline White is cute but obviously no match for smocking hot Windsor. On top of that she’s saddled with a brat that would benefit from a massive dose of downers on a daily basis.

The twist at the end is unique and quintessentially Noir. Nothing is what it seemed. It was all a tangled web of lies, deceit and mistaken identities. After Marie Windsor catches a bullet from the goons it is revealed that she was an Internal Affairs cop on assignment to entrap Brown in a payoff from the mob. 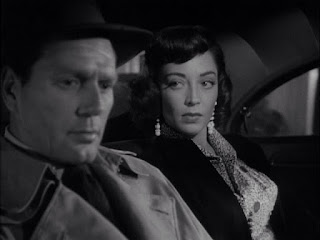 Windsor’s death is a cruel surprise, but we do get the feeling that she died the way she lived. It’s nevertheless an interesting one, because the viewer has to completely reconsider his perception of Windsor. Brown’s judgment about the kind of woman who marries a mobster was completely off. Looks and attitude don’t have to dictate a person’s personality. The old bromide holds true. Never judge a book by its cover. It’s June Cleaver who was married to the mob, inverting stereotypes and thus giving the picture some unexpected depth.

In the end Brown is left with the knowledge that his bosses not only didn’t trust him enough to tell him the true nature of his mission, but also considered him and Forbes crooked enough to be on the payoff list Mrs. Neall was carrying.

What’s really shameful is the way Windsor’s death is dealt with. Her sacrifice is never acknowledged by the others. The picture concludes too upbeat with McGraw and White walking happily out into the sunlight, without paying respect to a fallen comrade who was killed in the line of duty. The culprit for this blunder shouldn’t come as a surprise to anybody. The picture’s producer Stanley Rubin stated much later in an interview that Hughes - as so often unbeknownst to the crew and for reasons only known to himself -  cut the scene out.

The ending is the only real flaw in an otherwise near perfect picture. Blame it on Hughes.
at December 25, 2017