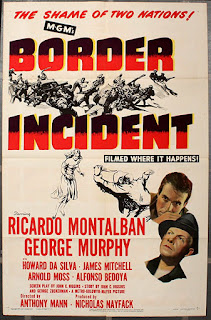 "The shame of two nations”

Border Incident, a story about the migrant-worker trade between Mexico and California, was directed by Anthony Mann for MGM. Cinematographer was the great John Alton, a man whose work defines Noir. Mann and Alton were teamed up six times between 1947 and 1950 and to this day are one of the best director-cinematographer teams in movie history.

Due to wartime labor shortage, the American government initiated The Bracero Program on August 4, 1942, enabling Mexican laborers to cross the border for a short period of time to work in the US agricultural industry, guaranteeing them fair wages and decent living conditions.


The plot of Border Incident is based on several real-life cases that occurred in the late forties where federal agents from Mexico and the US tried to stop illegal border crossing activities.
Ricardo Montalban plays Captain Pablo Rodriguez of the Policia Judiciales Federales, the Mexican FBI, who teams up with G-Man Jack Bearnes (George Murphy) to infiltrate a gang of smugglers exploiting poor Mexicans by bringing them into the US illegally to work, and then robbing and murdering them on their way back home. Rodriguez goes undercover as illegal migrant worker to investigate. Bearnes, undercover as an ex-con, arranges to meet with the American ringleaders to sell them stolen work permits. Soon both are in mortal danger from big boss Owen Parkson (Howard Da Silva) and his muscle Jeff Amboy (Charles McGraw) who run the lucrative racket.

Top-billed Ricardo Montalban is fantastic in his role. Not cashing in on his Latin Lover image, Montalban plays it straight and is a great leading man who can easily carry the movie by sheer charisma. Authoritative, self-possessed, impossibly handsome, charismatic, he is undoubtedly the star and hero of the movie, much more so than George Murphy. If you’re only familiar with Montalban from Fantasy Island, Star Trek and Esther Williams mermaid pictures you’re in for a nice surprise. There is not a bit of the hamminess evident he would develop later.
Montalban was an exception in Hollywood. A Hispanic actor who actually plays a Hispanic hero. 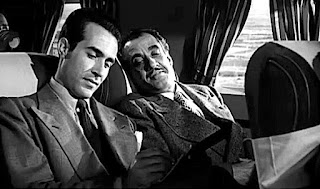 Former song-and-dance man George Murphy does very well as appropriately hard-boiled agent. Unfortunately the movie did not do for him what Murder, My Sweet did for Powell.

Further support comes from the great Howard Da Silva as the man at the top who lets others do the dirty work for him; and of course from everybody's worst (Noir) nightmare Charles McGraw who gives his boss a taste of his own medicine in the end.

Amazingly the movie was made for MGM, a studio that didn’t like to go slumming and favored glossy productions and glamour. MGM was struggling to adapt to a different post-war environment and their bottom-line figures weren’t looking too good for the first time ever. New production chef Dore Schary, who would later replace Louis B. Mayer as studio head, was brought on. He was a man with a different vision and wanted to bring realism to the studio. He and Mayer clashed almost right away.
Mann’s economical and lean style had been sharpened in Poverty Row productions, and he and Alton had already done fabulous work together on several previous Noirs for Eagle-Lion. It brought them to the attention of MGM and so Schary invited them over. The budget wasn’t much higher than at Eagle-Lion - Border Incident was shot as a B picture on location in Mexicali and Calexico - but both Mann and Alton knew how to work a tight budget. Economy was second nature for them and they exploited the barren border landscape and desolate geography to great success. 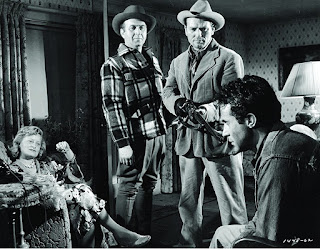 And with Mann at the helm the studio usually known for escapist fare finally got grittiness right. It also got a hefty dose of brutality, more than they were used to. Border Incident is as far removed from a typical MGM picture as possible.

The movie is action-packed, tense and suspenseful, especially the last 20 minutes. It doesn’t pull its punches when it comes to ugly violence. Violence is nasty, real and physical and nowhere more so than in Agent Bearnes’ long drawn-out death scene. To this day it still packs a punch. Bearnes is shot in a field near the border but isn’t quite dead yet. So the ever-imaginative McGraw, who got the order to make the murder look like an accident, drives a huge rotary plow tractor over him! Bearnes’ partner Rodriguez has to look on horrified while being unable to act. This being 1949 the audience doesn’t see any blood and gore splatter around, but it’s not necessary. We see the horror in Bearnes’ eyes as the tilting wheels come nearer and nearer while he can’t move. Then we see his silent scream and our imagination fills in the rest.
Audiences have long been preconditioned to believe that heroes don’t die. But in this new brutal universe, heroes don't necessarily win, and they sometimes die an agonizing death too. 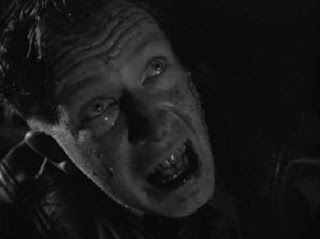 Film historian Dana Polan suggest on his DVD commentary that Border Incident is less Noir than police procedural/Government Agency movie. He isn’t too far off. The movie adopted the semi-documentary style that alleged to tell “ripped from the headlines” stories which we get to see through the eyes of law enforcement. In general the semi-docs started off with a zingy boy-scout pep talk praising the forces of authority in their fearless struggle against enemies of society and the state, be they communists, spies or gangsters.
Law and Order in these pictures is always benevolent, there to protect and serve. The government agents - upright, incorruptible and symbolizing a well-ordered and safe world - have to step in to make a world right again that has been disrupted by crime. Just doing our jobs, ma’m.

Traditionally, the Noir narrative is saturated with irony, ambiguity and fatalism. But this is not classic Noir, the picture doesn’t deal in fate or gullible suckers who can be bought with money and sex. Ambiguity and temptation are as far removed from our Untouchables as a virgin from a whorehouse.
Border Incident relies instead on the Noir elements of bleakness, claustrophobic disorientation, desperation, disillusionment and corruption. It’s a very dark film, both metaphorically, and in its cinematography. The night is a time for terror and unflinching horror.

This was Mann’s second-to-last Noir before he switched to Westerns. But he could never quite let go of his love for the genre and so took Noir’s dark perspective, moral ambiguity and troubled protagonists out West with him. There is already a good bit of Western-style sensibility mixed into Border Incident, obvious in its setting, clothing, men on horseback riding in a phalanx, ambushes and shootouts in canyons. The movie is like a bridge between the two genres.
Border Incident is a bit of docu-Noir, a bit of Western and a bit of social consciousness drama. 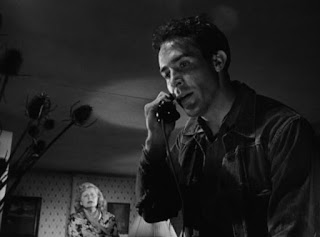 The movie goes out of its way to portray Mexico fairly and as an equal partner. Above all else the movie stresses collaboration between the two countries. The Mexican and American agents - mirror images of each other -  work hand in hand to bust the smuggling operation. In the final shot the American and Mexican flags can be seen hanging in equal balance as Mexican agent Rodriguez is decorated by his American counterparts.

Border Incident depicts Mexican migrant workers with real sympathy and understanding. Without exception the braceros are shown to be decent and hard-working people, not one of them is a thug. No blame is laid on the ones that come illegally to the US, because their actions arise from desperation. The have-nots of society can’t be too choosy in their methods.

Equally even-handed is the portrayal of the bad guys. Human traffickers and unscrupulous smugglers on the Mexican side who sell their own people for profit; American businessmen looking for cheap labor on the other side who are essentially dealing in the slave trade.
Border Incident is really less a movie about (illegal) immigration than human trafficking and exploitation.

Border Incident is an interesting amalgam of the conservative and the progressive. On the one hand we have the benign superior father figure of The Law, the white-hat hero from a (traditional) Western who sets things right in the end.
On the other hand we have a left-leaning message movie which pleads for tolerance, compassion, understanding and social reform. It would be hard to imagine Border Incident being re-made by a major studio today with anything resembling its unapologetically pro-Mexico stand. 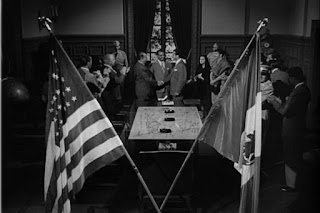 There’s no doubt that in certain ways the movie is very naive and simplistic with its clear-cut black and white morality. The battle lines are drawn clearly in the sand. There are the good guys and the bad guys and the basic distinction between them is never in doubt.

That's my only gripe with the movie. The producers should have cut down on the sermonizing. Sometimes it’s best to leave messages to Western Union. But it’s easily forgivable. The movie has its heart in the right place.
at February 21, 2018