“And this is a story of a number of people, and also a story of the city itself. It was not photographed in a studio. Quite the contrary. Barry Fitzgerald, our star, Howard Duff, Dorothy Hart, Don Taylor, Ted de Corsia, and the other actors, played out their roles in the streets, in the apartment houses, in the skyscrapers of New York itself... and along with them, a great many thousand New Yorkers played out their roles as well. This is the city as it is. Hot summer pavements, the children at play, the buildings in their naked stone, the people, without make-up." 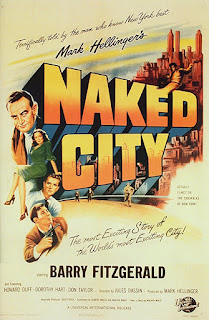 Directed by Jules Dassin for independent producer Mark Hellinger’s production company The Naked City was Dassin’s next-to-last American film - after Brute Force also for Hellinger -  before he left the country as a result of a HUAC investigation.

The film’s title was taken from NY tabloid reporter Weegee’s book The Naked City (1945), a collection of sensational photographs of crime scenes and bizarre street life. His gritty and unpolished snapshots formed the foundation for Hellinger's film.

The Naked City is a film ahead of its time. Movies in the 40s were mostly shot in Hollywood studios and backlots. Reality was (re)-constructed and rigorously choreographed on sound stages with atmospheric emphasis on light and shadow.
But after the War filmmaking increasingly took to the streets of real cities, courtesy of improved sound technology and lighter camera equipment. Though to have a picture shot entirely on the streets of a city was an almost revolutionary idea at the time. On-location filming had been used earlier in Hollywood, but its use was infrequent and not indicative of a trend.

Two developments sparked an interest in this new approach to movie making. First the work of combat camera crews on battle fields and second the films of Italian Neo-Realist directors -  who favored on-location shooting and used the camera as a neutral recording device.
Location pictures gave (crime) stories a semblance of on-the-spot journalistic report. They emphasized a flow of life that a studio-based film couldn't convey and in fact often deliberately avoided. 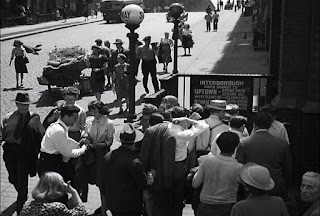 Filmed entirely on location in New York, The Naked City bucked the studio-shot trend. Hellinger wanted life unscripted. His picture was filmed in real apartments, in real buildings, offices and shops, though a few times this claim has to be taken with a grain of salt. I’m fairly sure some inside shots were filmed in a studio though I have no proof of that. The "extras" were real unsuspecting bystanders walking the streets, not always knowing they were filmed. To make this work, some trickery had to be involved. Camera men had to be hidden inside a truck so as to avoid attracting crowds of curious onlookers. There was little official aid in filming on New York City streets at that time.

At first glance Neo-realism would seem diametrically opposed to Noir, it sat at the opposite end of the stylistic spectrum. But by blending the styles of neo-realism and classic Noir, a new type of filmmaking was born. Semi-documentary Noir that still respected its roots.

The Naked City ushered in a turning point for Noir. While Dassin’s Brute Force is one of the quintessential 40s Expressionist Noirs, full of desperation and claustrophobia behind impenetrable prison walls, Naked City portrays a vital city in summer. It's Day and The City. There’s no doom, despair and paranoia, at least not for its main characters. With his next film, Night and the City, Dassin would go back to intense Expressionism.

The opening scene is an aerial shot of New York, taken from a plane circling Manhattan. A short time later we see a truck spraying the day’s filth down the gutters.
This aerial shot is accompanied by a voice-over by Hellinger who’s acting as the voice of the City. No credits are seen on the screen. Hellinger expresses poignant and philosophical, though doubtlessly at times corny and overly verbose, thoughts about the inner life of the city and the fabric it is made of. Not everybody liked the narration, many found it too folksy and intrusive.

This is followed by a series of slice-of-life sketches on city life. The camera as Peeping Tom. We see gritty Manhattan streets, luncheonettes, Lower East Side food markets, ritzy apartments and shabby tenements; rich uptown doctors, soda jerks in the Bowery, newspaper boys, a woman getting her hair done, people on the subway to the outer boroughs. None of these vignettes bear any relation to the mystery, instead they give us the flavor of the city.
All of a sudden these everyday scenes are interrupted by a gruesome murder. Dassin is using this technique during the entire film, alternating between real city life and docu-drama, allowing us to see the case connected to the wider fabric of city life.

The plot itself isn’t much. A young woman, model Jean Dexter, is found murdered in an apartment in New York City. Seasoned homicide detectives Dan Muldoon (Barry Fitzgerald) and wet behind the ears pup Jimmy Halloran (Don Taylor) take up the investigation and find a whole slew of shifty and unsavory characters with more or less good reasons to kill Dexter, above all of them habitual liar and crook Frank Nils (Howard Duff).
What we see from then on is CSI: New York circa 1940. The cops hit the streets following up one lead after another, talking to friends, relations and shopkeepers at the places Dexter worked and frequented, “asking a thousand questions to get one answer”. What they don’t know is that they’re being watched and followed by the murderer. 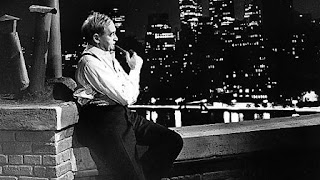 No hard-boiled gumshoes and deadly dames can be found here, the detectives are not impossibly handsome men who solve the mystery while guzzling down shots of bourbon and getting lucky with the ladies, they’re flatfoots doing an unglamorous job and solving the crime by old-fashioned leg work. They don’t have dark secrets either. Halloran's happy home life reveals itself to be a happy home life.

Barry Fitzgerald is Barry Fitzgerald, hammy as always and wearing his Oirish leprechaun charm proudly on his sleeve. He’s nevertheless good as Lt. Muldoon and doesn’t try to come off as overly hard-nosed.

One of the saddest and most haunting scenes in the film is when Jean Dexter’s parents come to the city to identify the body of their daughter. Both are crushed by the blow, her father stoically and on the surface unemotionally accepting his daughter’s death, her mother literally spitting out her hurt for how the daughter treated them, changing her name and being ashamed of her lowly and “ethnic” background. She literally seethes with hate. But it all melts away once she has to look at Jean on a concrete slab in the morgue. "Why wasn't she born ugly?” she later asks full of despair. 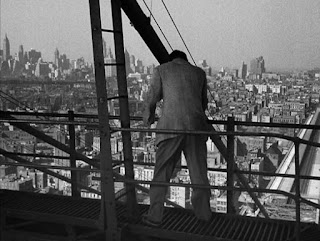 The finest scene of the movie is the manhunt sequence through NY, ending on the steel ladders of the Williamsburg Bridge against the skyline, where the murderer makes his last stand. One almost sympathizes with him then as one of the hunted and lonely, looking down onto a city with hundreds of people who are oblivious to his plight.

Some viewers found the plot unremarkable. As a police procedural the movie is barely routine, but this is not the focal point of the film.
The movie is a cinematic love letter to New York, showcased in all its glory and ugliness. Why else would the killer’s brother be interviewed on a skyscraper construction site? Because we get a fabulous view of the city.
The star of the film is New York itself and it has rarely been captured so vividly and alive. It is a wonderful time capsule. Hellinger called it his celluloid monument to New York.
What the audience gets is a real sense of place, something not too often seen in classic movies. In the end life goes on in the irrepressible city. Jean Dexter was just a six-day wonder. Once her murder is solved, the soggy newspapers in the gutter move on to the next big case. She was just another statistic. This is city poetry at its finest. It’s a brief reflection on the fleeting nature of sensational news, even more relevant today with 24-hour disposable news cycles.

The closing line to the picture reminds us that cities are made of people who encounter love, hate, joy, despair and tragedy. Each of them make their lives in the city, day-in and day-out. But ultimately their struggles don’t count for much.


The picture is a wonderful nostalgic homage and that’s why it works so well still today. Even if you haven’t lived through those times.
at February 14, 2018