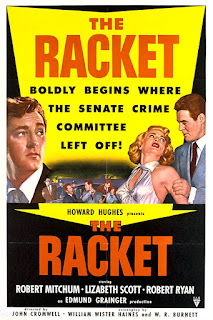 The Racket is another fair to middling Howard Hughes offering that is less outright Noir than straightforward crime thriller. It was a remake of Hughes own 1928 movie of the same name which in turn was based on a 1927 stage play. The play daringly suggested that crime was not only practiced by gangsters, hoodlums and career criminals, but also by guardians of law and order and scions of society. Gasp! By 1951, especially after the Kefauver Hearings on Organized Crime, this was a bit of an old chestnut and nobody was particularly shocked anymore.

On top of being a bit out of date, the picture can’t hide its stage origins, especially in the precinct scenes. Characters enter and exit stage right and stage left, as if they’re on Broadway.

Mobster Nick Scanlon (Robert Ryan) has been running Anytown, USA for years by having several local government and law-enforcement officials in his pocket. However, he can't touch incorruptible police captain Tom McQuigg (Mitchum), who refuses all attempts at bribery. He’s continually transferred from one precinct to another because he’s stepped on too many toes. When Johnson (William Talman), one of his best and most honest officers, gets killed by Scanlon, McQuigg wants to bring down Scanlon once and for all with the help of nightclub singer Irene Hayes (Lizabeth Scott). 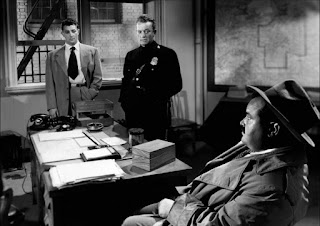 Hughes overzealous supervision created another movie that - if not an outright mess -  certainly could have been tighter and more streamlined had Hughes kept his harebrained ideas to himself. No such luck. As he was want to do, he not only couldn’t leave a picture alone during filming, he had to tinker with it even after wrapping. Again he spent thousands of dollars on editorial revisions, retakes and reshoots, especially after Kefauver and his Hearings had become trendy. With predictable results.

Sam Fuller wrote the script’s first draft, but of course Hughes scrapped it. I assume it wasn’t quite safe enough. He had the more  conventional William Haines rewrite it, then tossed his script too and drafted hard-boiled crime writer W. R. Burnett to do the deed and add more action.

Though John Cromwell was the credited director, directing duties were shared by many, including Mel Ferrer and Tay Garnett. Hughes even pressed producer Edmund Grainger and film editor Sherman Todd into (directing) service. In the end it was Nicolas Ray who was left with the thankless task to pick up the pieces and make a decent film out of the chaos. Needless to say, even he couldn’t make a purse out of a pig’s ear.
What Hughes never understood was that you can’t make a good film out of bits and pieces of material, sewn together like a patchwork quilt. It has to be built from the ground up with a solid foundation. His tinkering was supposed to achieve perfection, but it actually yielded a product that was uneven, choppy and occasionally schizophrenic.

What stays though is an amazingly dark vision about Anytown, USA, a city like a hundred others that is completely in the hands of a corrupt mob. It almost seems as if the entire city is mob-affiliated with no way out. 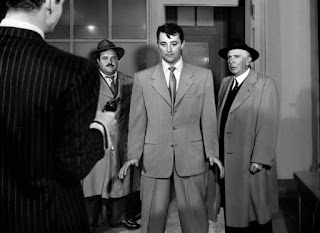 In the wake of the Kefauver Hearings on Organized Crime (1951) - alluded to on the movie poster - a wave of crime films followed which purported to tell exposé stories of stalwart lawmen and their fight against organized crime. In the beginning of the movie we get the obligatory preachy “crime doesn’t pay” message, this time not delivered by a governor, but the a Crime Commission clearly modeled after Kefauver’s Investigating Committee.
Crime had moved out of the hood into the boardroom, from smuggling illegal booze across state lines to buying judges and rigging elections. Crime had not only gone corporate, it had gone national. It now functioned as a partnership of corrupt politicians, judges and business men with methods a lot less crude than Prohibition-era strong-arm tactics.

If this movie belongs to anyone, it is scenery-chewing Robert Ryan. He’s at his psychotic, deranged and snarling best. Ryan is incredibly intense and literally seething with venomous rage, but at the same time manages to come off as a tragic figure. He is oddly sympathetic when he has to realize in the end that his days are numbered. He’s a man who has outlived his time. As a Prohibition-style enforcer, a streetwise tough guy, muscle and violence is all he knows when it comes to protecting his two-bit territory. But times are changing as even his goons notice, Scanlon just didn’t get the memo. It is a battle for dominance between Nick Scanlon and the (never-seen) Old Man, between old-school gangster and the new faceless Syndicate.
It is to Ryan’s credit that his Nick Scanlon doesn’t end up as a one-note caricature. 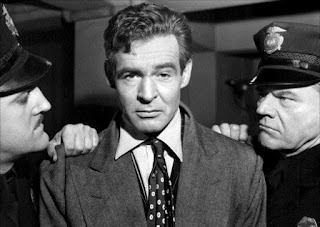 Mitchum though is a different matter. He’s on the other side of the fence, in true 30s gangster fashion a former boyhood pal of Ryan’s. Honest, stolid, upright, righteous…stop! hold it right there. A squeaky-clean Mitchum? Say it ain’t so. To say he’s playing his role with indifference would be an understatement. He sleepwalks through the movie. He even gives the cops in his new precinct the requisite “stay on the straight and narrow, boys!” speech. But it comes off as anything but motivational, as if Mitchum knows he’s really not the guy to pontificate, especially after his own marihuana bust a few months earlier. I saw a review that called him “Eliot Ness with a hangover”. Spot on.
McQuigg is never even tempted once. The script gives him nothing to learn about himself, nothing to work with. He’s the same man at the conclusion of the movie as in the beginning. He has almost the entire town against him, his house is blown up and his wife almost killed yet he faces no internal conflicts at all. His character doesn’t evolve.

McQuigg must be one of Mitchum’s least interesting roles, and he knows it too. It’s a toothless performance. That wholesome act just doesn’t sit right. This is Mitch we’re talking about, not Jimmy Stewart. He’s not so much understated as bland. However, as RKO’s No.1 star he dutifully did his job as Hughes asked, even if the material was beneath him.
Mitchum only comes to life in his last standoff with Ryan. It’s a collision of two giants. 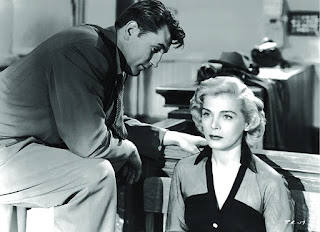 As always Liz Scott is good in her role as yet another nightclub singer. No-one could ever mistake her for a great actress, there’s always something slightly wooden about her acting, but with her husky breathy whiskey-soaked bedroom voice she could hold any man’s attention. She doesn’t so much give a performance as take up space on the screen and that's okay with me. Given the right material, she is very effective.

William Tallman is cast against type as goody two shoes rookie officer who gets killed by Scanlon. But the real scene stealer here is gum-chewing William Conrad as another crooked cop who brings to life his character more than anybody else on the screen.

In the end the picture doesn’t amount to much. The stuff of greatness is there, it’s just that it is all too moralistic, too simplistic, too clear-cut. The good guys are good, the bad guys bad. Nobody’s motives and intentions are in the least bit murky, there’s no ambiguity here.

There is something incredibly old-fashioned about this film which is simply out of whack with Noir. The punch is missing.
The star power of Ryan and Mitchum counts for a lot, but the very good cast is hampered by an outdated story and trite cliches.
Hughes may have tried to update his Prohibition era play, but ultimately he got a 1920s crime melodrama that should have stayed in the past. I give it an A for effort.
at January 31, 2018