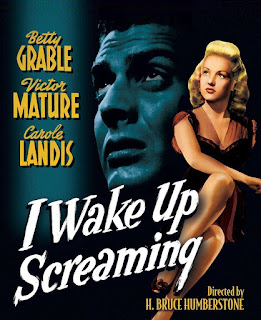 Just as the seminal The Maltese Falcon, made the same year, I Wake up Screaming is not full-blown but early transitional Noir, made in 1941 for Fox. Director Bruce Humberstone (of Charlie Chan fame) and cinematographer Edward Cronjager infuse the film with a haunting atmosphere. Strangely, neither of them ever directed another Noir after this picture. Somehow, instinctively, they got the look and style of Noir right. Only Stranger On The Third Floor, made the year before, exhibits the same striking Noir visuals.

I Wake up Screaming was based on the eponymous novel by pulp author Steve Fisher, a writer for Black Mask Magazine. Hardboiled crime pulps were the feedstock of Noir and Hollywood finally began to recognize their existence and popularity and started to put them on film.
As a little nod to its source material there is a shot of a newsstand proudly displaying Black Mask Magazines. Until I Wake up Screaming Fisher hadn’t met with much success, after its release though he became a sought-after screen writer, responsible for screen plays such as The Lady in the Lake, Johnny Angel and Dead Reckoning. 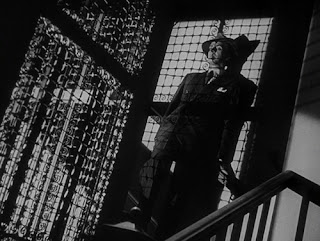 The title alone should land us firmly in Noir territory, it evokes all the terror and dread of a frightening nightmare (though nobody actually wakes up screaming in the movie). Visually this is certainly the case, thematically it is not quite.

Sports promoter Frankie Christopher (Victor Mature) is accused of the murder of Vicky Lynn (Carole Landis), a young waitress he “discovered” and is trying to turn into a star. He introduces her to New York’s high society and only succeeds too well. She’s on the verge of making it big and wants to take off to Tinseltown… when she gets mysteriously murdered. For no discernible reason, Inspector Ed Cornell (Laird Cregar) has it in for Frankie from the beginning and wants his head on a silver platter. But Cornell is a man with a hidden agenda.
To complicate matters, Vicky’s sister Jill (Betty Grable) has fallen in love with Frankie and doesn’t believe in his guilt.
Also along for the ride are Alan Mowbray as a washed-up ham actor and Allyn Joslyn, in a George Sanders role, as a witty and acerbic gossip columnist.
The movie works well as a genuine whodunit. Suspicion shifts from one character to another and the audience is never quite sure if Jill’s faith in Frankie’s innocence is justified or if she too is being played. 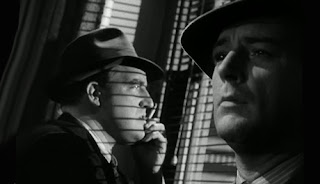 Victor Mature was a likable actor but his acting could best be described as solid and adequate. To his credit he was aware of his limitations, but this picture is a good example of why he had such a long and successful career. His performance is energetic and heartfelt and makes the viewer root for him despite the fact that he is a rather shifty and cagey character.

Grable, Mature and Landis had all recently starred in musicals and were to a certain extend identified with the genre, so their casting in a crime movie was a bit off-beat at the time.
It seems the producers weren’t quite willing to let go of the occasional Broadway touches here and there. The opening credits play out like a musical with bright marquee lights flashing across the screen, superimposed on the New York City skyline. In the public pool scene there is a fountain feature that is just waiting for Esther Williams to show up. For a second I thought two different movie scripts got mixed up. Granted, they had to show Grable's famous gams and Mature’s chest. It's nice, but it simply doesn’t fit the film’s mood. 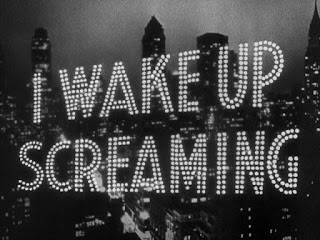 There even is the faint echo of countless Broadway productions in the story line: a promoter wants to pull a pygmalion and turn a cheap little hash-slinger into a star. It's just that Galatea tried to play her Pygmalion for a sucker. Not a smart idea. She gets herself murdered and we’re back in crime territory.

There are a few light comedic moments, mostly involving Mowbray and Joslyn, which are at odds with crime picture conventions and would be more at home in a sophisticated 30s drawing room comedy. Nick and Nora and some zany screwball banter wouldn’t feel out of place.

A strong romantic strain runs through the picture, the focus is a bit too much on the blossoming romance between Grable and Mature. This is heightened considerably by the ad nauseam repetition of Somewhere Over the Rainbow, a lovely song but not a song that should be anywhere near Noirville. It is too sentimental, it belongs in a fantasy film, and saying it’s overused would be kind.
Alfred Newman’s Street Scene, featured in so many Fox Noirs to come, fits the movie much better although it too would have benefited from fewer repetitions.

Betty Grable’s casting is an interesting one too, she’s out of her natural habitat, her wholesomeness barely touched by the darkness surrounding her. But she displays real warmth in a rare dramatic role.

Noir should be like a cheap shot of bourbon that burns your throat on the way down, but somebody threw a good slosh of bubbly champagne into the mixture. It’s OK though, Noir hadn’t the foggiest idea of its own existence yet.

Carole Landis however is a perfect fit for Noir. She is cold and calculating, a girl with a “heart like a rock candy”. The second she doesn’t need somebody anymore she drops them like a hot potato. Her part is fairly small, but even when she’s gone she haunts the film like a ghost. She is what drives the movie. She lives on through flashbacks, even dead she is still everywhere, in picture frames displayed on walls and desks.
Vicky would have done anything to get her screen test and she finally got it too. Unfortunately for her the only time anybody sees it is when it's shown to a roomful of rejected admirers suspected of her murder.

The second we lay eyes on Laird Cregar though we know we are in Dark City. As an actor he steals the spotlight. Cregar was an unlikely Hollywood star. Overweight, lumbering and with a sinister manner, he seemed naturally destined to play villains. He was not happy about it and wanted to prove to the world that he could play leading men roles. In an effort to reinvent himself he went on a crash diet. He was on the verge of real stardom when his heart gave out at the age of only 31.
When the audience gets their first glimpse of Cregar in the interrogation room, he's giving Mature the third degree while lurking in the shadows and hiding behind a bright lamp which shines directly in Mature’s face. Cregar’s face is not revealed, he is an enigma. Shortly after Jill recognizes Cornell as the man who was stalking her sister.

From the second we see Cregar, we get a sense of uneasy foreboding, his whole attitude is simply disturbing. He’s often photographed from below and at canted angles, which makes his already big and hulking frame even bigger. His menacing size contrasts sharply with his quiet voice and smooth line readings, there is an unsettling quality of stillness about him. He seems to be in a constant trance-like state.
Almost every scene with Cregar feels claustrophobic. Apartments and prison cells feel even more cramped because of his looming presence.

Cornell is a man whose life is stripped of any humanity. He lives in the shadows and barely ever steps out of them. He is incapable of sustaining human relationships, he just lurks and watches. He is the quintessential Noir protagonist. His life is a bottomless pit of loneliness, despair, agony and futility. The theme of obsession runs through the movie. Vicky desperately wants to make it big, men are obsessed with Vicky, but it is Cregar’s Cornell whose obsession with Vicky knows no bounds. He’s a man on a crusade.
As we find out later, he had caught on to the real killer fairly early but keeps hounding Frankie anyway, because in his sick mind he holds him responsible for Vicky’s death. After all it was Frankie who took her away from him when he tried to make her a star. His police methods are not only unorthodox and underhand, but would most certainly have been illegal even in 1941. Search warrants are for amateurs. Stalking, threatening, breaking and entering and planting evidence are more to his liking.
One of the creepiest scenes is when Mature wakes up at night to find Cregar sitting in his bedroom because just maybe Mature might talk in his sleep.

But Cornell is not only obsessed, he’s doomed too. And he’s well aware or it.
Jill asks him: “What's the good of living without hope?” to which Cornell answers: “It can be done.”

This is Nihilism in a nutshell. Cornell is a man who is already dead, he’s just forgotten to die.

But somehow, for all his menace, in the end Cregar makes us feel sorry for Cornell, and that is a tribute to his acting. When we see his shrine for Vicky it is a beautiful piece of understated horror, and we can understand his deep pain.

Elisha Cook, switchboard operator at Vicky’s apartment and another obsessed admirer, plays his signature weasel with the hangdog loser attitude. He too is a creep, he takes it upon himself to enter dead Vicki's apartment and "gather her things together.” It doesn’t take much imagination to guess what he was doing at that time.

Despite all its idiosyncrasies, this movie belongs in the Noir canon.
at December 28, 2017