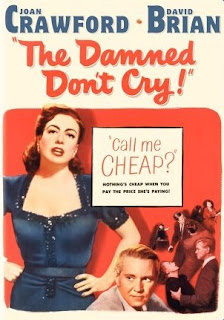 “Don't talk to me about self-respect. That's something you tell yourself you got when you got nothing else.”

Joan Crawford is an actress I find an endlessly fascinating object for study, though I can’t profess to be an unabashed fan at all. But there was always something incredibly gutsy and intriguing about her performances.
What jumps to the eye right away when viewing especially her later movies is a recurring theme that runs through them. To get a deeper understanding of films like Mildred Pierce, Flamingo Road, Possessed and The Damned Don’t Cry to name a few, one has to look at the phenomenon that was Crawford herself and in the process dig a little deeper into her mental make-up.

Crawford’s life was the classic Hollywood rags-to-riches story. Born into poverty, she knew from an early age that she wanted to BE someone. Her sole desire was to be a star and her ambition was all-consuming. She wanted money, success, respect, beautiful clothes, luxury… and she was incredibly ruthless in her methods to achieve her goals. Nothing and nobody was allowed to stand between her and the top. If this sounds suspiciously like a plot of one of her movies, that’s because it is. 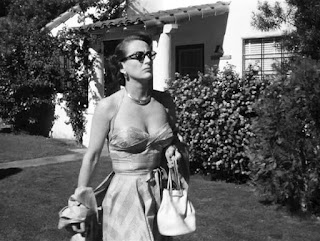 Young Joan literally set out to invent herself. In gossip columnist Louella Parson’s words she was “the only star I know who manufactured herself…she drew up a blueprint for herself …and then set out to put life into the outline.” Bette Davis said in a similar fashion: “To me, she is the personification of the movie star. I have always felt her greatest performance is Crawford being Crawford.”
Crawford used every hour of the day to promote herself and her image. BEING Joan Crawford took precedence over everything else. Crawford has often been called The Ultimate Movie Star simply because she was such an exquisitely manufactured product.

Crawford pictures were star vehicles. Especially from the mid-40s on the narrative featured women from the wrong side of the tracks who claw their way to the top and succeed against all odds.

Not a trained actress, she lived her roles more than she played them. Her films fit her like a glove, because they used elements of its star’s life story. Crawford took a character and moulded it around her own personality. Most of the pictures she made could simply be renamed: The Joan Crawford Story. They were all simply about Joan's fabulousness.

Granted, the formula became repetitious quickly, but it proved to be successful with the audiences. It could seamlessly be combined with any other formula, be it gangster movie, Noir or woman’s melodrama. Joan’s loyal fans loved her for it, notwithstanding script absurdities. 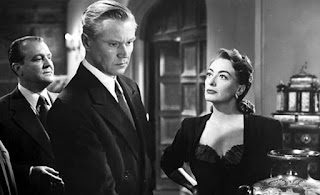 Crawford craved total control on the set over every aspect of filming. As the center of attention, nobody could be favored above her. Her jealousy of other actresses was legendary, and her control issues most certainly led her to often choose male co-stars who were not only younger but often much less famous and well-established than she was, if they weren’t outright nonentities.

In The Damned Don’t Cry, we have contract player David Brian, B actor Steve Cochran and nice but dull-as-dishwater Kent Smith. They’re all just supposed to act as a foils for Crawford’s star performance.
Brian though is amazingly charismatic as snake-like gangster, and testosterone-laden Cochran, as always, steals the show though that surely couldn’t have been Crawford’s intention. A little misstep maybe on her part.

Loosely based on the story of Bugsy Siegel and Virginia Hill, The Damned Don’t Cry was directed by “woman’s director” Vincent Sherman for Warner Bros. The production values are top-notch, definitively helped by on-location shooting in Palm Springs.

The film has some ludicrous plot contrivances, but what Noir hasn’t? Yes, it’s hokum, a lurid and trashy potboiler, but the film effectively conveys a sense of moral ambiguity and entrapment that builds around Crawford and her descent into a life of crime from which there is no escape. To me this pictures has everything a torrid melodrama should have, even if it is completely overwrought. Or maybe just because of it. Crawford and camp go hand in hand, and I don’t mean that as a slight. But to her credit, Crawford never loses her dignity, not even when the material was beneath her. She managed to make tawdriness classy. 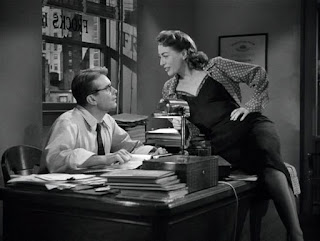 The film starts out with a “where did I go wrong” flashback confession from Crawford in which she recalls the events that drove her back to her estranged parents’ house, the last place she ever wanted to see again.
Crawford plays Ethel Whitehead (what a name), a miserable drudge from the wrong part of town married to a poor oil worker. They live in shabby respectability that is just this side of abject poverty. The death of her little son shows her that living by the rules doesn’t get her anywhere. “I want something more out of life and I’m gonna get it” becomes her mantra. She takes off to New York where she catches on pretty fast to life in the big city. She finds work as a “model” for a low-rent fashion house, and soon discovers that “private fittings” with customers, I mean buyers, are a lot more lucrative. On top of being an escort, she becomes a cast-iron gold digger and climbs the social ladder to the top one gullible suitor at a time.
On the way up she encounters mild-mannered and timid account Martin Blackford (Kent Smith) who’s easy pickings. He wants to marry her, but she’s set her sights a bit higher. He lacks her compelling drive and ambition and so becomes negligible. She then becomes the mistress of big-time gangland boss George Castleman (David Brian), an ice-cold, urbane and polished snake, who knows the difference between a flowerpot and a “vahse”. He helps Ethel reinvent herself as mysterious socialite Lorna Hanson Forbes (sounds familiar?). All this luxury has its price though and Castleman’s price is her help in bringing down his underling Nick Prenta (Steve Cochran) who’s gotten a bit too big for his own good. Lorna falls for Prenta though, Castleman doesn’t like it  and the inevitable showdown of all involved ends in tragedy… 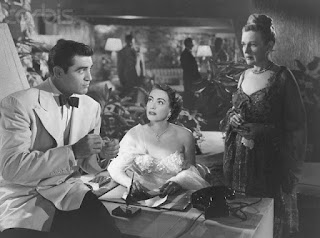 The Damned is a movie about ruthless ambition, greed, corruption, betrayal and ultimately murder. A deep-rooted cynicism runs through it. Success by any means is everyone’s philosophy, so corruption becomes by necessity the only way ahead. Accountant Martin is willing to go along for the ride leaving his scruples behind because he thinks he can win Lorna. For her he’s just a step up the ladder. Lorna tries to take the boys on in their own world and uses sex to compete because it’s the only currency she’s got. She does understand that what she’s doing is morally wrong, it’s just that the difference between right and wrong has become inconsequential and her moral compass has slipped.
Castleman clawed his way out of his humble beginnings and stopped at nothing to achieve his goals. He’s nobody’s fool, not even Lorna’s. His power is a strong aphrodisiac for Crawford and their relationship is a twisted struggle for control.

That is Noir: the world is a dark place and sucks all the goodness out of decent people once they’ve gotten a taste of the good life, until nothing is left. But you can depend on karma to come back to bite you in the behind…

Crawford makes hers transformation from downtrodden housewife to glamorous socialite believable even though a good bit of suspension of disbelief is required. But that is a testament to her acting ability. You can’t take your eyes off her though she is most certainly too old for her part. Even over-the-hill Joanie doesn’t disappoint.
Eddie Muller described Noir as suffering with style and this is certainly the case here. Joan suffers beautifully, however the mink and pearls she swathes herself in take the edge off considerably.

In later years Crawford was often the butt of jokes and not unjustifiably so. She hardened into a parody of herself. By the early 1950s Joan Crawford was coming towards the end of her spectacular run as one of the leading female stars of Hollywood and even with her best years behind her, she was still a force to be reckoned with though it became increasingly hard to believe Crawford as the irresistible siren the script requires her to be. But by sheer force of spirit she manages to rise above script absurdities and make tosh enjoyable.

When lesser pictures fail, it's often because the actors can't put across the ridiculous plot contrivances. Crawford always could.
at January 29, 2018