Tomorrow is Another Day was directed by strictly B director Felix Feist for Warner Bros and is a virtually unknown Noir. The movie basically consists of two distinctively separate parts which makes it feel slightly disjointed. We have two movies in one. The first half has all the high-octane ingredients for a crackerjack Noir, but the movie doesn't play by the (Noir) rules. What promises to be a dark and cynical Bonnie and Clyde “couple on the run” picture, then becomes romantic melodrama in the second half which is light on crime. Cynicism melts into sentimentality. In the narrowly confined parameters of Noir Tomorrow is a failure, it doesn’t fulfill genre expectations; but as the Noir formula was written in stone only retrospectively, there’s no reason why this picture shouldn’t break the mold.

What we get is a Noir about redemption. It’s an interesting setup. Is change possible? Can one’s life be ultimately redeemed? Are people forever damned by their past?

After 18 years inside, Bill Clark (Steve Cochran) is released from prison. He was only 13 when he went in, after having killed his abusive and drunk father in what with some justification can be called self-defense. After a reporter ruins his chances at a decent job by splashing his picture across the morning papers, Bill takes off to NY where he meets cheap peroxide blonde dime-a-dance girl Cay Higgins (Ruth Roman). Cay is a hardboiled dame if there ever was one. After demurring quite insincerely and playing coy, Cay asks Bill to her apartment where her cop boyfriend Conover is waiting. Boyfriend gets angry and knocks out Bill, Cay shoots him in self-defense and sees her chance to let Bill take the blame. They decide to go on the lam and find work on a farm as lettuce pickers where they meet fellow migrant workers the Dawson family. But they can’t hide forever, in a pulp crime magazine the Dawson's little boy sees a wanted poster for Bill promising a nice reward… 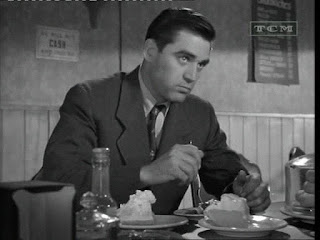 Cochran - playing against type - truly breathes life into his portrayal of Bill, he simply nails the character. Having spent all of his adult life in prison, he literally never grew up other than in the purely physical sense. He’s a child trapped in a man’s body. He’s still a babe in the woods. He’s completely unprepared to face the outside world and society. He hasn’t changed much since he went in, but the world has.
From the first we’re on his side though we don’t know his whole story yet. Not until at least the halfway mark do we find out that his killing was justified, leaving him essentially blameless. During the trial he just refused to take the easy way out by showing any kind of remorse, instead truthfully stating he didn’t regret his killing. The jury took it as utter cold-bloodedness and handed down a guilty verdict.

The film shines in the depiction of Bill’s first moments of freedom. Bill has never kissed a girl. He’s never had a drink, never driven a car, he has nothing in common with the people outside because he never shared their life experiences. His first few hours in freedom are at the same time funny and heart-breaking. He sees a new snazzy convertible parked in the streets with electric buttons (!) and he’s in awe. He just has to touch them. He sees a pretty girl and simply tries to follow her. His social skills are non-existent. He then goes into a diner and like a child who can’t get enough he orders not one, but three different pieces of pie, as well as his very first beer. Our initial reaction is to laugh at him, but we can’t.
Then he goes to a dancehall and sees Roman and one look is all it takes. He uses his prison pay to buy dances and trinkets for her. He’s got it bad. It’s lust at first sight. 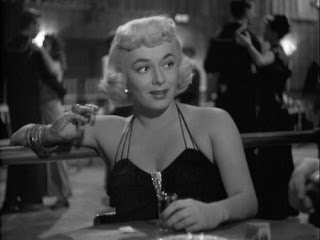 Cay is a taxi dancer at Dreamland. Taxi dance halls were incredibly popular from the 20s to the 50s. Patrons bought a ticket for a dime to dance with the girl of their choice. Taxi dancers earned commission on every dance ticket— it wasn’t a bad deal if the girl knew how to milk the customers. It was a gift from God for lonely men, outsiders and misfits and most certainly a place a guy like Bill would gravitate towards. The dance hall scenes are fantastic. They have a wonderfully lurid appeal.

Roman is at her baddest best and is as hard-bitten and calculating a cheap dame as any that can be found in more famous Noirs. Cay’s original career dream as ballet dancer didn’t pan out. Now she’s selling dances, dreams and then some at a dancehall. It is more than strongly implied that she and the other girls are moonlighting as prostitutes, or maybe it’s the other way around. They seductively coo invitations to “private lessons” after hours in the customers’ ears and Cay makes it clear her affections can be bought with pretty shiny gifts, even though she tries the blushing innocent act. It's not very convincing. She isn’t above fleecing her customers and stealing other girls’ “suitors” when they’re not looking either. Cay also has a cop boyfriend who -very likely - doubles as her pimp.

Enter Bill who Cay right away sums up as a perfect patsy, ripe for the plucking. She’s not just morally ambiguous, she’s absolutely rotten. 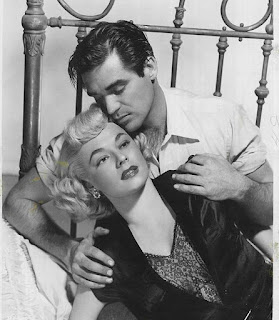 Up until the couple go on the run and stay in a little motel where Bill asks Cay to marry him, the movie is pure Noir. After that we’re in romantic melodrama territory. We go from hard-boiled to soft-boiled. Cay changes her hair color from brassy blond to brunette and from one second to another she’s a changed woman. Her tough facade begins to crumble. The symbolism is all too clear, with her hair color she’s changed her personality. The bad can simply be washed out, only one application of shampoo necessary. This stretches credibility to the max. Cay’s change is never really explained, it happens out of the blue. Character development is sorely lacking. Roman can pull off both roles, but the script lets her down. One second hard-bitten tramp, next second wholesome and loving wife. The brassy cheap bottle blonde was just an illusion. True Love rears its ugly head (sorry, I had to say it), and really, true love has no business in Noir.

After getting married, Bill and Cay try to make a decent living for themselves as lettuce pickers, living in small shack like other migrant laborers. The picture is a bit Grapes of Wrath light at that point, minus the desperation and exploitation. The workers’ lives are depicted with real warmth. For the first time Bill and Cay find contentment in honest hard work and the camaraderie with others.

After seeing the wanted ad though, the Dawsons inform the police about Bill who come for him. Not to let her husband get into any more trouble, Cay shoots Bill in the shoulder and confesses it was she who shot Conover. Both are taken into custody. 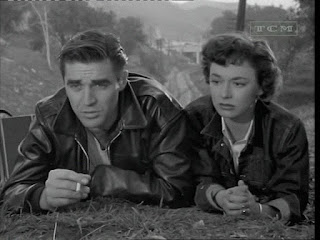 And here is where the script really crumbles beneath the actors, this time with a vengeance. They’re taken to the DA who tells them that Conover made a statement before he died that Cay shot him in self-defense. The hack writer of the pulp wanted ad was a bit trigger-happy and concocted a BS story without having all the facts. Bill and Cay are now free to continue their new life together.

The ending is not only laughable, but truly ruined what could have been a great Noir. It is too upbeat and obviously studio-imposed. The PCA didn’t just neuter a good film, it shot it all to pieces. This copout completely dulls all the rough edges set up in the first half by abandoning all kind of political and social criticism.

The bad cop wasn’t really so bad and corrupt, the DA is just really a nice benevolent uncle who only wants to help. All authority figures in the movie are simply too benign and sympathetic. The theme of corruption and not giving the downtrodden a (second) chance is blown to bits.
Only Bill’s and Cay’s paranoia made them run. Only in their imagination were they trapped by circumstances. All their fears were really unfounded. It is not fate that tripped them up, just their fatalistic belief in their own doom.

The movie is really quite good and it has a lot to recommend it, though the viewer has to abandon his preconceptions about Noir. But for me the two halves of the film never quite gel. True Love in Noir usually amounts to a useless sentimental pipe dream that only suckers believe in. Tomorrow is a Noir that has a moral center, but that’s not what I’m looking for in Noir.

Other Noirs handled the redemption angle much better. What I wanted was more Bonnie and Clyde, Noir to the bitter end. It all should have ended in a hail of bullets. As is stands, the producers owed us a warning in the beginning: soap suds alert.