No Orchids for Miss Blandish is a tawdry tale penned by prolific British novelist James Hadley Chase, an author now mostly forgotten but in his time very successful. The film was based on the eponymous book from 1939, also published under the more salacious alternative title of The Villain and the Virgin.

Chase was an interesting phenomenon, a British writer of American pulp who had become fascinated by the hard-boiled crime fiction that made its way across the Pond. He began writing in the 1930s at a time when Prohibition in America gave rise to the gangster culture. Hollywood knew a good thing when it saw it and churned out one gangster movie after another. The British public fell in love with it too. So Chase decided to jump on the bandwagon and capitalize on the trend. Though he only made two brief visits to the US in his lifetime, most of his books were set in America. Chase got himself a slang dictionary, maps, newspapers and books about gangsters and set to work. The result was No Orchids for Miss Blandish, a book full of murder, drugs, rape, torture and sadism. It was a publishing sensation and gained notoriety very quickly. The critics jumped on it and deemed it vile, sick and disgusting. Always a good thing for circulation numbers.

No Orchids is an utterly unsentimental and matter-of-fact depiction of sex and violence which is without a doubt still quite astonishing today. Miss Blandish, kidnapped by mad-dog utterly depraved gangster Slim Grisson, is kept in a near-constant drug-induced stupor for months by Ma Grisson so her mentally unstable and impotent psychotic son can find out the differences between boys and girls. Miss B’s own father believes in tough love and doesn’t want his kidnapped “soiled” daughter back. “Better dead than deflowered” is his charming estimation of the whole situation.
The book is positively unsavory, exploitative and crude and as such a highly entertaining pulpy shocker. 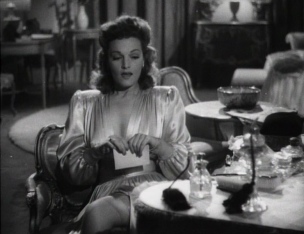 For the film the story obviously had to be toned down tremendously. The film’s plot has Miss Blandish (Linden Travers) as the virginal and posh heiress to a vast fortune who is engaged to a bland but eminently suitable young man, of course approved by the family. Her fiancé considers her frigid and cold because she doesn’t return his kisses. On a way to a hot date, crooks hold up their car to steal Miss Blandish’s expensive necklace but botch the heist and kill the fiancé. They take Miss B with them for some fun. A rival group of gangsters, led by Slim Grisson (Jack La Rue), moves in and Grisson takes Miss B to his nightclub and keeps her prisoner. But of course she falls in love with him and turns her back on her family and her upbringing.

On the poster, the movie promises to be as "shocking as the book", but unfortunately the producers didn't deliver on that promise. The film is decidedly tame in comparison to the novel. Yes, there is quite a bit of pervasive violence throughout, people get knocked about constantly. There are lots of half-naked dames, suggestive situations and the barely more than mildly shocking subject matter of Miss B falling in love with the gangster who kidnaps her, which would now be filed under Stockholm Syndrome. But it is very hard to see what all the fuss was about. All the controversial aspects of the book were taken out. Grisson’s and Miss B’s whole relationship was transformed. They may have been off to a weird start, but in the movie Grisson never forces himself on Miss B, no drugs are involved and she clearly doesn’t leave when she has the chance.

What the changes leave us with is simply a story about a doomed and tragic romance where both parties are victims of circumstance. One wonders why the censors had their knickers in a twist. The only explanation can be that Miss B is sexually awakened by someone socially and morally completely unsuitable, and likes it.

Nevertheless the picture caused a huge public outcry and drew criticism from all corners. After the War much harder crime films about “spivs” had already become popular in Britain. It wasn’t all tea and crumpets anymore. Brighton Rock (1947) was one of the first films to spark the censors’ outrage due to its depiction of violence and crime.
When the notorious No Orchids came along, British censors went haywire. Reactions went from “A wicked disgrace to the British film industry” to "It has all the morals of an alley cat and the sweetness of a sewer” and "the most sickening exhibition of brutality, perversion, sex and sadism ever to be shown on a cinema screen”. A tempest in a teapot surely but a brilliant way to orchestrate a sensation. The filmmakers got exactly what they wanted. Clearly this kind of high praise was enough to practically guarantee the movie’s overwhelming success. Who can resist this kind of advertisement? Low moral tone? Sold.

But underneath all this vehement condemnation lay a different fear: that British culture was becoming Americanized. British theaters showed a vast amount of Hollywood imports, loved by the audience but not by the critics and British filmmakers who saw themselves as defenders of British culture which they didn’t like to see “corrupted”. The most damning insult came from The Guardian. It labeled the film ”thoroughly un-British”.

But the movie’s problems lie in completely different areas. Not only has the pulpy heart of the source material been snuffed out, but from the moment Miss B and Grisson meet they behave like two silly star-crossed lovers in a mawkish melodrama on their road to doom. This isn't exactly The Story of Temple Drake. The trash factor is gone. And what’s the use of pulp without that?
It’s Beauty and the Beast with all the beastliness taken out. What we get is a bittersweet love story. Grisson and Miss B act like moon calfs.
The only good thing is the downbeat and tragic ending. After Grisson is killed by the police, Miss B throws herself from her balcony over the loss of her lover. Well, that's at least something.

Another issue is Jack La Rue, a minor leading man of the 30s. He’s the only American in the cast and trying to impersonate George Raft (who had been tapped to play Grisson but bowed out), but simply can’t quite carry it off. I’m not much of a Raft fan, but he has La Rue beat by a long shot. La Rue doesn’t have much charisma and the supposed feverish chemistry between him and Linden Travers is more tepid than sizzling. Both parties are supposed to be in constant ecstasy, but it doesn’t quite translate to the screen.

The best and most genuinely sexy scene is not between LaRue and Travers, but between investigative reporter Dave Fenner, who’s been trying to free Travers from her ordeal, and nightclub singer Margo when she’s undressing for bed. He whips the drawstring from her pajamas. Those two generate more heat than the main couple. She invites him to stay.

Lily Molnar as Ma Grisson though is very good, a tough-talking and repulsive Ma Barker clone. 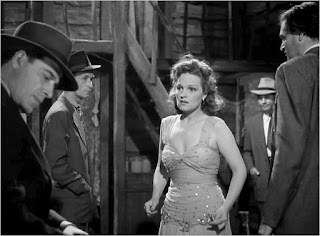 But what gives the audience a real headache is that No Orchids takes place in some alternate gangland universe. Made in England and starring a mostly English cast, the filmmakers clearly have an outsider’s view of America and can’t quite nail it. It’s gangland USA through English eyes. It’s all very genteel. It plays more like a parody of a gangster movie. The American slang never feels right. Accents are all over the place, one imdb reviewer called them appropriately “a mixed bag of crumpets and hot dogs”. The actors don’t quite fit their roles. For the most part it’s simply awkward. You can’t take a thing out of its natural habitat and expect it to survive untouched.

The film’s an oddity. There are no orchids for Miss Blandish and no hotdogs either.

What it comes down to is this: The Brits make absolutely fantastic Brit Noir and crime dramas, but not American Noir. This of course goes the other way around too, Hollywood has a long and bad track record of meddling in things it shouldn’t.
at February 06, 2018