“One can’t stay out of doors all the time. One needs to come in from the cold.”

The Spy Who Came in From the Cold is based on John le Carré’s eponymous book. Having worked for MI6 himself, Carré had a solid knowledge on the subject. His portrayal of secret service agencies is realistic and unflattering as he took a consistently bleak view of the espionage business. Spy is an utterly cynical study of human treachery.

Made at the height of the Bond craze, the film is Bond through a glass darkly. It is the anti-companion piece to 007, the spy profession is stripped of all its glamour and seductive powers. Director Martin Ritt conceives a vision of intelligence operations with bleak squalor in place of thrills, fun and sexy dames.

Ritt’s direction is faultless and very faithful to the book. The cinematography is stunning. Unusual for a film from 1965 Spy was shot in stark forbidding black and white. Most studios by then had switched to color, but Ritt knew what he was doing. Nothing else would have conveyed the film’s funereal, relentlessly grim, hopeless and desolate mood better. The environs are austere and drab, the protagonists filled with anguish and alienation. Throw every Noir buzz word at the film and it would stick. This is not Neo-Noir, this is 100% proof unadulterated Noir served neat and straight up, a throw-back to the 40s. As far as spy movies go, this is the gloomiest of them all. A study in futility and bitterness with a core that is pure nihilism. Life per se is meaningless. Nothing lasts, nothing is worth striving for because everything ends in death. 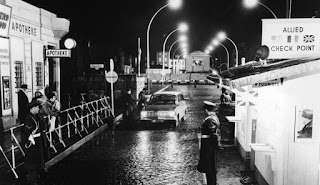 Ritt creates surroundings that are always dark, cold and rainy. If daylight exists at all, it is never the sunshiny happy kind. Light doesn’t provide warmth. It’s cold and clinical and supplies just enough illumination to expose the rottenness of the dirty game that is the spy profession.
Characters appear to be constantly freezing, as if they are emotionally crippled and dead inside. The cold has numbed their senses.

“I want you to stay out in the cold a little longer."

It is the height of the Cold War and Alec Leamas (Richard Burton), head of the Berlin Station for the British Secret Service, is tasked with the mission to take down an enemy spy, Hans-Dieter Mundt (Peter Van Eyck), head of the Abteilung (East German intelligence). British Intelligence wants to trick the Abteilung into thinking Mundt is a British double agent and so eliminate a dangerous enemy. Leamas - posing as a drunk and disillusioned spy who's fallen from grace - pretends to defect, but his charade unravels fairly quickly and he’s forced to admit he’s still a British operative.
To Leamas’ surprise it turns out Mundt actually is a double agent and he helps him and his girl-friend Nan escape. But there is just one last surprise in store for Leamas…

A large part of the film's appeal lies in trying to figure out - along with the characters - what is really happening. Everyone is in the dark as to other people’s motives and agendas. Knowledge that has been taken for granted proves to be inaccurate. Answers don’t lead anywhere, they just raise more questions.
Leamas is willing to swear that it is impossible for his superiors to run an agent without his knowledge right under his nose. He would be mistaken.
The film is never quite clear if Burton is just playing at being a embittered down-and-out drunk or if he actually has gone off the deep end after a lifetime of spying. Too convincing is his cover. His deeply felt cynicism is no pose. Where does playacting end and reality begin? 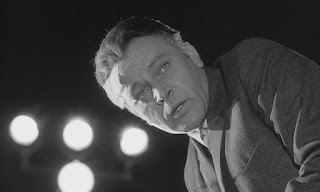 The plot is very complex, its intricacies can be hard to follow. There’s next to no action, the pacing is deliberate, the screen play is wordy, but it doesn’t matter. The film’s quiet, melancholic pleasures have nothing to do with the plot. The pleasure comes from watching Burton who plays with incredible subtlety. He is fantastic as the disillusioned and burnt-out agent on a fake defection mission. One has to watch this picture to appreciate what a phenomenally brilliant actor Burton was. The close-ups of his ravaged face make the movie, in fact they ARE the movie. Burton’s lined and tired face is full of pain and and resignation. Burton IS Leamas and one has to wonder what inner turmoil supplied him with the insight to portray so jaded a man.

Burton’s acting is more than ably supported by Oskar Werner as Fiedler, Peter van Eyck as Mundt and Clair Bloom as Nan who all in top form.

At the time of Spy Burton was at the height of his fame and success. Often it seemed he put his considerable talents more into overblown epics and living the jet-set life with Liz. But when he put his mind to it, he could blow everybody else off the screen. His performance here is uncharacteristically subdued and restrained, he doesn’t go in for grandiose outbursts of passion and emotion. He simply oozes inner anguish. But we can’t take our eyes off him, he’s magnetic.
When Leamas has to helplessly watch one of his agents -  who he hoped to extract from the East - being killed in the no-man’s land between East and West, his face seems like a mask, but the exhaustion and hopelessness he feels register in tiniest nuances and flickers of emotion.
The botched extraction of his agent is the end of the line for Leamas. He’s more than just tired, the game has sapped his soul and it has shaken him to the core.
All he wants now is to “come in from the cold” and leave it all behind. His masters agree on the condition that he embark on one last mission. And he accepts because he wants to exorcise his demons.

Leamas must have been an idealist once, in a different time and place he probably barely remembers. Nobody can become that cynical without ever having believed in a cause. But years of double and triple crossing and ensuing tragedies have worn him down. He’s a loner without emotional attachments. Only for a short time is his loneliness alleviated by his love for earnest librarian Nan Perry (Claire Bloom), an idealistic and naive True Believer who has no clue as to what exactly she is supporting. Another patsy who doesn’t stand a chance.

“I mean you can't be less ruthless than the opposition simply because your government's 'policy' is benevolent, can you now?”

But if Leamas is a disillusioned idealist, his superiors are emotionless, amoral, dried-up, callous little men in tweed suits, manipulating their foot-soldiers with coaxing or blackmail into doing their bidding. On the surface caring, they’re really all-knowing puppet-masters pulling invisible strings just to make the puppets dance and amuse themselves, interested only in their little game whose depths nobody who’s not in the know can even fathom and understand. They have long since been removed from notions of moral right and wrong.
Though field operatives risk their lives for their country all the time, for their masters they are completely expendable. After all that’s what they’re paid for. Terrible things happen in this film while people talk quietly and effortlessly to one another in monotonous tones…about tea, or murder. It’s all one to them.
Did his superiors set Leamas up for a fall from the beginning? Was he supposed to die at the Wall because he had become disillusioned and thus useless? We never get an answer. 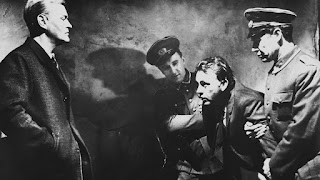 Agendas are murky. None of the spy masters pay more than lip-service to their cause and their loyalty to their country. Neither side seems to be interested in a belief. They’re not in it for mere gain, or fun, or glory, they’re not doing it for Queen and Country or the Great Socialist Experiment. It’s about power, control and self-preservation. Capitalist, Communist…it makes no difference. Sharks who devour anyone who happens to cross their path.
Who’s friend and who’s foe is in no way clear-cut. The very concept of the enemy becomes blurred: “Before, he was evil and my enemy; now, he is evil and my friend,” shrugs the desolate Leamas at Mundt’s reveal as a double agent. 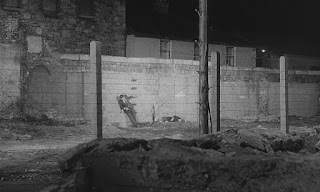 Just before the end it dawns on Leamas that he’s never been as savvy as he thought he was at playing the game. Being one step ahead was an illusion. Before he dies Leamas has just enough time to figure out that his whole mission was nothing but an elaborately orchestrated set-up. Leamas’ own role in the affair was a convenient smoke screen for his superiors; he was a pawn in a complex double-cross used by both sides to accomplish Byzantine ends that he couldn't see coming.

Life’s cheap. Then you die and bleed to death in a gutter. Good doesn’t triumph over evil. Humanity has no part in the spy game. Or in life in general.

Leamas’ last monologue is full of self-loathing and finally comprehension.

“What the hell do you think spies are? Moral philosophers measuring everything they do against the word of God or Karl Marx? They're not. They're just a bunch of seedy, squalid bastards like me. Little men. Drunkards, queers, henpecked husbands, civil servants playing cowboys and Indians to brighten their rotten little lives.”

The film has lost none of its power to emotionally affect the audience. One can truly feel the chill in the air, and it stays with us long after the movie is over. The Cold War has never been so cold.
at January 08, 2018