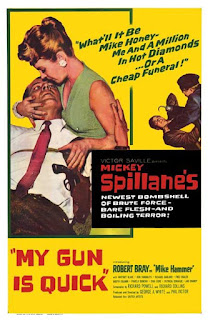 "I just crawled out of a sewer, not a decent person left in the world"

My Gun is Quick is a pretty bland Spillane offering that doesn't live up to either the nice quote nor to other Spillane movies like I, The Jury (minus Biff Elliot) and Kiss Me Deadly. If the audience hopes to see the hero wallow in the cesspool of humanity, we’re gonna be disappointed. Needlessly the novel’s plot was changed, to the point of being completely unrecognizable.

Mike Hammer (Robert Bray) meets tired and disillusioned young hooker Red at a greasy spoon. Hours later she turns up dead and the valuable ring she was wearing, from an Italian treasure stolen during the War, is gone. Hammer is out to avenge her death trying to unravel a convoluted conspiracy involving sexy divorcee Nancy, several other available dames and lots of unsavory characters.

Mickey Spillane was a comic book writer before he began to write pulp fiction and his books clearly reflect that. Hammer is written as a cartoon character. Raymond Chandler loathed Spillane’s writing and protagonist intensely though he shouldn’t have. Hammer is simply the darker alter ego of Marlowe, Spade or Archer. While Chandler had the critics on his side, Spillane was loved by the audience. Mike Hammer was firmly entrenched in the gutter, and he liked it there.

Mickey Spillane’s Hammer was fueled by a rage against violent crime, but at the same time considered the legal system a big hindrance to mete out justice. Hammer doesn’t just bend the law, he holds it in contempt. For him law and justice aren’t the same thing and for that reason he often decides to enforce the law himself by acting as judge, jury and executioner. He is an avenger, in a way a precursor to The Punisher or Judge Dredd.
Hammer has often been called misogynistic but it’s simply not right. He’s not so much misogynistic as misanthropic. Hammer hates everybody. 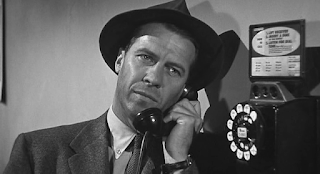 Spillane’s creation was a crude, violent, sadistic, unethical commie-hating thug with a badge who gleefully beat the snot out of people just for the fun of it, and other film versions didn’t bother to pretty him up. Ralph Meeker nailed the character in Kiss Me Deadly, though obviously this being the 50s, his portrayal had to be toned down too. Bray is really not Spillane’s Hammer, he may still have the macho appeal but whitewashes Hammer’s key traits considerably. He’s a boy scout, much closer to Chandler’s knight in dirty armor. Hard-boiled, morally ambivalent maybe but with a heart of gold. He is simply too timid! Hammer’s brutality should be raw and unapologetic. The brutality here consists mainly of grabbing a guy by the shirt and a few punches.

When Red’s pimp starts harassing her, Bray beats him up and gives the hooker enough money to buy herself new shoes and a bus ticket back home. This is Hammer the savior of humanity. He takes pity on Red and even gives her a fatherly (!) good-bye kiss. This guy actually gives a damn and it’s simply out-of-character. 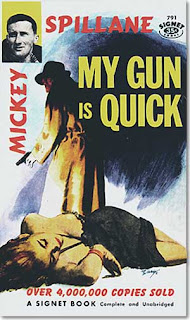 This movie just doesn’t capture the feel of Spillane’s novels, everything that makes Spillane Spillane is missing, so why name the main character Mike Hammer? Robert Bray had the looks to play Hammer, but he felt neutered. Many late 50s movies were a lot more brutal and gritty than this one. It would not have been impossible to film Spillane right even back then. And if the producers hadn’t hampered Bray with a lame script, he could have been perfect.

Another issue is the uneven pace of the movie, it was filmed by two different directors which showed, though it picks up in the second half.

The outside locations are interesting. The 50s featured a lot more on-location shooting, but this is not a glamorous LA we get to see. Instead we have big freeways, oil derricks and stark industrial sights which convey a sense of desolation and bleakness.

On the plus side there’s some good dialogue and lots of duplicitous, scantily-clad and occasionally lethal babes. 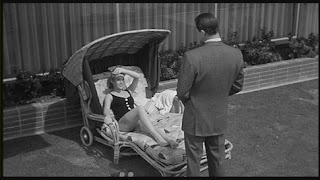 But unfortunately, the greasy spoons, run-down hotel rooms and strip clubs that are Hammer’s natural habitat are not exploited enough and don’t quite capture the seedy ambience of Spillane.

The movie is definitively worth a watch though I'd call it a failed effort. It looks as if - even now -  we still have to wait for the ultimate Mike Hammer being brought to the screen. I’m afraid it's gonna be a long wait.
at February 10, 2018