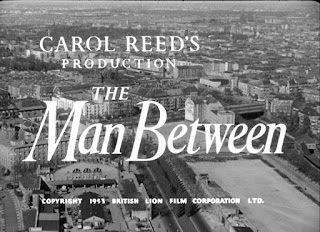 Directed by Carol Reed, The Man Between is a Cold War spy thriller/Noir with strong romantic undercurrents. After the groundbreaking success of The Third Man, critics and audience alike anxiously awaited Reed’s follow-up effort. Upon its release four years later, the picture received mostly mediocre reviews from critics bemoaning the fact that Reed had failed to produce another Third Man. To many The Man Between seemed an inferior effort, but it simply suffers unfair comparison to a masterpiece. The truth is that every movie is inferior to it. This is hardly an insult.

The Man Between stands perfectly fine by itself and doesn’t need to fear any comparison. The cinematography and the cast are marvelous, the love story is heartbreaking, and the music is perfectly suited to the bleak and hopeless atmosphere. The Man Between deserves much more credit than it's been given. Mason and Bloom are excellent together in this film.

With respect to the oft-noted parallels between them, the tone of The Man Between differs considerably from The Third Man. The former lacks Graham Greene's dry wit and his sharp and cynical observations about the complexities of East-West relationships. There’s no irony in The Man Between, and no humor to lighten it up.
The better comparison may actually be to Odd Man Out, another story of a man on the run, where Reed likewise employed his trademark chase sequence including the snowy finale. 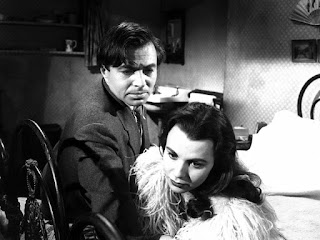 I’ve seen a few reviewers pointing out the rather pedestrian and uninspired cinematography of The Man Between. They couldn’t be more wrong. The photography is excellent which may not have been obvious in the unrestored version, but thankfully the film got a superb restoration from the BFI.

The plot centers on Susanne Mallison’s (Claire Bloom) trip to occupied Berlin to visit her army doctor brother and his new German wife Bettina (Hildegard Knef). There she meets Ivo Kern (James Mason), a mysterious acquaintance of Bettina’s who does unsavory work for the East Germans. Kern is after a man named Olaf Kastner who has been rescuing people from the Russian Sector. To get to Kastner, Bettina is supposed to be kidnapped, but by mistake it is Susanne who gets taken. Now Kern must extract her and maybe into the bargain get on the good side of the Western authorities… 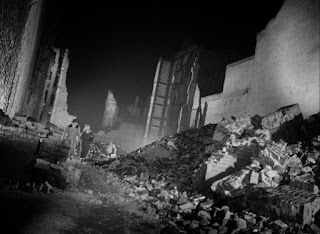 The film was (mostly) shot on location and is a fascinating snapshot of its time. The opening sequence, a sweeping aerial view of a ravaged Berlin, immerses the viewer right away into the grim reality of a city suffering from the fallout from a war.

To this day, it is sobering to see the ruins of a destroyed country. No studio set could ever convey the absolute devastation brought on by falling bombs. Seven years after the War Berlin was still mostly lying in ruins. At the dawn of a new age, the city was facing an uncertain future whose outcome nobody could yet foresee or even remotely guess. I’m sure it resonated deeply with contemporary viewers who lived through that period of complex post-war morality, poverty and questionable decisions.

The Cold War had come to stay. West Germany was on the eve of reconstruction and soon-to-come prosperity, East Germany found itself under another dictatorship. We see huge posters extolling the virtues of communism in the Russian sector, suffocating and threatening at the same time.

As he did with Belfast and Vienna, Reed again demonstrates his genius for exposing the dark underbelly of an iconic city. He perfectly captures the atmosphere of those eerie times in a divided city, which nobody who has seen will ever forget. The film is steeped in a mysterious, melancholy and tragic atmosphere. Ruins and dark shadows contrast with brightly illuminated construction sites. The stark winter coldness of snow-covered rubble-strewn streets full of debris convey an air of desolation, unease and hopelessness which is mirrored in the drabness and quiet desperation of the city’s inhabitants. The Man Between not only captures the atmosphere of a beleaguered city but also its psyche. Add to that the feeling of claustrophobia in a place walled in by enemy country, and you have yourself the perfect Noir setup. 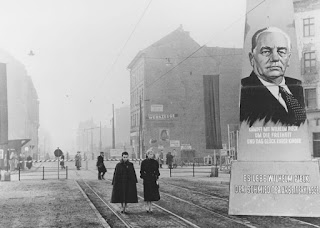 The film is divided into two parts, the first part Cold War espionage intrigue, the second part, after Suzanne’s abduction, romance and ultimately redemption. In the beginning the audience is not at all sure who is friend and who is foe, whose side the players are on, who’s pulling the strings and who’s just a pawn in the game. And what is the game anyway? Everybody is keeping secrets, loyalties seem to shift constantly in an ever-changing pattern of uncertainty.

The second part is romance without sirupy sentimentality. The last 15 minutes of the film between Mason and Bloom have a lyrical quality to them, they’re heart-breaking and poignant, and display a subtle, tender and very understated eroticism. Mason tells Bloom of his life and crimes in the war. She doesn’t care. She’s fallen in love with him anyway. But the star-crossed lovers know they live on borrowed time. An impossible love in impossible times.

Mason is phenomenal here, as always in his European films. Hollywood, with a few exceptions, never seemed to know how best to utilize his persona, as opposed to British filmmakers who knew exactly how to exploit it.
At different times he is world-weary, charming, opportunistic, ruthless, tender and in the end heroic, in a word ambiguously noirish. He’s concealing many secrets and we’re never quite sure about his agenda.

It turns out he is no Harry Lime though, but a disillusioned idealist, a good man gone bad, who before the war believed in things like justice and the Rights of Man, until a very rude awakening. He lost his way, betrayed his ideals and did what he could to survive. But he hasn’t lost all his humanity, he still has a moral core. 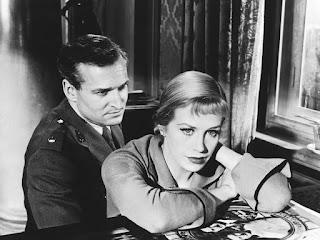 Mason also serves as a sort of father figure to a young boy who follows him around on a bike, even though Mason pretends not to care. Their scenes too are touching. The boy clearly adores him, and in a tragic twist it’s they boy’s devotion that inadvertently betrays Mason’s presence to the border authorities, just seconds before he almost makes it to the other side.

The scene is a poignant piece of poetic injustice, a case of “so close”. It shows the absolute arbitrariness of life and death.

The title’s meaning is quite obvious. Mason stands between two sides, good and bad, West and East. The ending is heart-wrenching, he dies in the no-man’s land between them, sacrificing his life for Bloom’s. He finds his redemption, if only in death.

Claire Bloom in only her second role displays genuine warmth and sensitivity as a young, naive and idealistic schoolteacher who is forced to grow up and learn that the world is not just black and white. 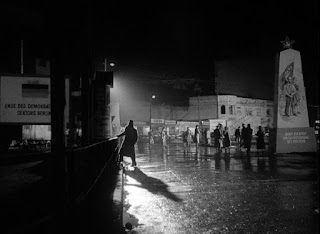 Also impressive, though a bit underused, is Hildegard Knef of the husky voice (always billed as Neff in her international films).There’s a wonderfully poised and enigmatic quality to her which is unfortunately not enough exploited in the film. As opposed to Bloom, she’s jaded and world-weary beyond her years because she’s seen too much. She too has her own secrets, Susanne fears Bettina is having a clandestine affair with Mason right under her husband’s nose, but the truth is much more complicated and sad. It isn’t only physical barriers that separate people, it is the often shameful secrets in their lives that keep them apart and from finding happiness.

Reed is one of my favorite directors and this film is an absolute must-see. It’s a snapshot of a world gone by, frozen in time.
at February 18, 2018