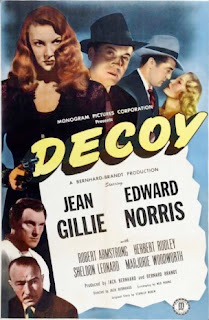 Decoy was directed by virtually unknown Jack Bernhard who has only 12 directing credits to his name. The picture - Bernhard’s first and best - was produced by lowly Poverty Row studio Monogram and is only 76 minutes long, but it’s a doozy and textbook Noir all the way.
This is Poverty Row at its finest. Decoy is proof what can be done with a measly buck fifty budget and an off-kilter vision. It may be Monogram’s jewel in the crown. Everything comes together to create an unexpected little gem. Unfortunately Bernhard would never reach the same exalted heights of punchy pulp again.

Bernhard was then-husband of the female star Jean Gillie and he made Decoy as a showcase for his British wife to introduce her to American audiences. He wanted to make her a star but he should have known that barely anybody became a star making pictures for Poverty Row. Gillie had that fate in common with her contemporary Poverty Row femmes fatales Peggie Cummins, Ann Savage and Janis Carter. This should have been a star-making performance but Gillie's stardom never came. She made only one more movie before dying at the young age of 33 of pneumonia. 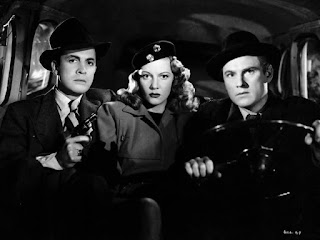 Poverty Row pictures never tried to hide what they were. There was a genuine rawness about them that glossier studio productions simply couldn’t reproduce. They benefitted from their shoestring budget, and sometimes a short shooting schedule, cardboard sets and a fast-and-loose script full of bizarre chunks of plot worked to their advantage.

Poverty Row didn’t have, and didn’t need, any pretensions at intellectual filmmaking. Often their pictures were all the better for it. Because of this lack of pretense with Decoy we get one of Noir’s greatest Bs - crazy, wonky, absolutely original, with a bit of horror and sci-fi thrown in.

The plot is utterly implausible and intelligence-defying. It’s a tough cough drop to swallow. At times one may be afraid of this turning into an Ed Wood picture, but fear not. It’s oodles better than that.

Old coot gangster Frankie Olins is supposed to die in the gas chamber. His lady love Margot Shelby (Jean Gillie) is simply prostrate with grief about it, not because of him but because of the 400 G he has stashed away somewhere and whose location he’s willing to take to the grave with him. So she comes up with a brilliant plan. Her other boyfriend, gangster Jim Vincent, has to help her steal Frankie’s dead body from the prison morgue. Furthermore she needs the help of prison doctor Lloyd Craig, so he can administer the antidote Methylene Blue for the cyanide poisoning from the gas chamber. After Frankie has died! What? We could wonder now what the writers were smoking when they came up with that plot point, but it works best if we - like the protagonists -  take it at face value. Reviving dead people is no big deal. Just go with the flow. 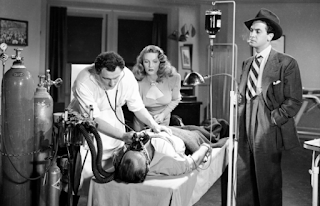 Frankie indeed comes back from the dead - with a little nod to Frankenstein’s monster: “I’m alive!” -  and then is stupid enough to fork over the treasure map. For his efforts, he gets a blast from a .38 to remember Margot by.
You see, Margot really doesn’t want to share the loot with anyone…and anyone who stands in her way must die.

The story is told in flashbacks with a voice-over by mortally wounded Margot who got hers too in the end. In true Noir fashion the flashback freezes out any hope of a happy ending.

Gillie gives a standout performance, and for my money she takes first place in that illustrious Femme Fatale Hall of Fame. She knocks your socks off. The movie is what it is because of Gillie. She raises what could have been just another crummy little flick to utter gem and in the bargain has garnered a cult following. She looks absolutely fabulous in her wardrobe. It’s hard to believe she would even need Methylene Blue to revive a corpse, her perfume alone should do it. 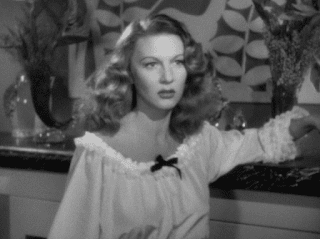 It seems only Poverty Row -  flying somewhat under the radar - was capable of bringing out the absolute worst in their deadly dames. Never again have they been so utterly depraved, evil and unredeemable. There’s not even a touch of sympathy in Margot.

She is as ice-cold, ruthless and lethal as they come. You’ll hardly find a more rotten dame. She uses men like disposable Kleenex and would double-cross her pet goldfish if there’s money in it. Kathy Moffat had nothing on her.

She doesn’t bat an eyelid when her gangster lover No. 2 Vincent bumps off gangster lover No.1, poor Frankie who gets killed off twice within a matter of hours. Talk about having a rough day. A short time later Margot runs over lover No. 2 with a car. After lover No. 3, prison doctor Craig, has dug up the loot she pumps him full of lead while she laughs hysterically. Before the boys can wise up to the fact that they’re chumps, it’s too late. She plucks them off like ducks in a shooting arcade. The entire male cast loses their heads, and their lives, bar one. Suckers always die.

This is Noir distilled to its essence. Life is cheap and then you die and bleed to death in the gutter.
But Craig isn’t quite as dead as Margot thought. He follows her to town to settle the issue once and for all. 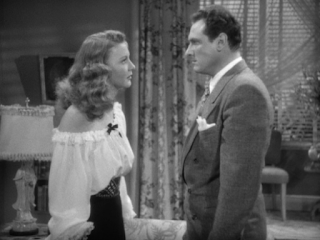 This movie is one of the few times where the motivation of the main character for her all-consuming greed is explained. Margot spits out her contempt for poverty in a passionate speech about the “dingy, dirty street” in England where she came from. It’s the same kind of street that her doctor lover lives on now and it is nothing she could ever accept. Poverty is the one thing that scares her.
What’s more, she knows exactly that the supposedly devoted-to-his-work-amongst-the-poor doctor in his shabby little office is just waiting for his chance to break out and be corrupted, though he professes a liking for the simple life. But one look at Gillie and his world changes forever.

Craig’s existence so far, that is clear to him, has been stultifying and banal. Margot knows he’s easily corruptible. At the start of the movie we see the doctor’s face in a shattered mirror with a jagged edge, hinting at another darker side of him. The good doctor isn’t quite as straight-laced as he always thought. 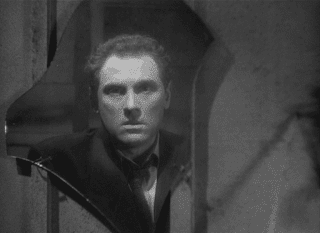 Craig is another one in a long line of Noir characters who, until opportunity and temptation knocked, had been righteous and stable paragons of duty and responsibility. In true Noir tradition, "having an upright character just means that a person has never encountered temptation, the temptation that would reveal how unreliable their noble principles were all along" (Robert B. Pippin, Fatalism in American Film Noir). “I had to smash that shield of ideals”, says Margot. It wasn’t that hard.

Of the male cast it is only Sheldon Leonard as Sgt. Joe Portugal who stands out. He was a strong actor with a great screen presence and a good antagonist for Gillie. He has Margot pegged alright, he’s the only man who doesn't succumb to Gillie’s charm though he is tempted. He doesn’t let her cloud his judgment, and that’s why his is the last man standing at the end of the movie. Like Sam Spade he’s not willing to play the sucker for a dame.

Thankfully the ending of the film is not a cop-out. It doesn’t dissolve into sentimentality. It is uncompromising and stays true to the spirit of Noir. Margot confesses all her sins to the cop, but she isn’t repentant. She’s proud of what she’s done. She’s bragging. Some lethal dames go soft in the end - even Phyllis Dietrichson had her two seconds of soppy remorse. Not so Margot. There isn’t an ounce of remorse in her. Even dying she’s only thinking about the money that is all hers now. She dares Portugal to kiss her (“Jo Jo, just this once, come down to my level’) and when he leans in for the kiss she mocks him and his compassion for her. Here we can see the essence of her character. Margot’s only goal in life has always been to tear down as many others as possible before she herself has to go the same way. 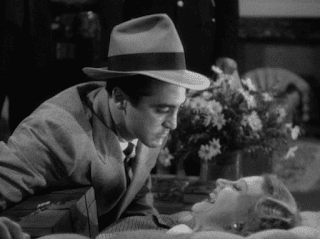 The ending is sardonic and emphasizes another important Noir theme: you can try to gamble against the house, but you lose every time. It’s what counts as a healthy moral in Noir.
There was no money in the strong box, Frankie had been on to his lady love from the beginning. The joke’s on her.

But, as is always the case with good Noir, the audience roots for the morally corrupt and we almost hope Gillie to get away with her schemes.

Is Decoy a great and meaningful movie? Not if you judge it by conventional standards. But never say Poverty Row only produced low-rent quickies and and schlock. We get a lot of bang for the dime.

Decoy is a fabulous wild card you just have to take a chance on. It’s a film with a heart as black as the abyss.
at January 12, 2018